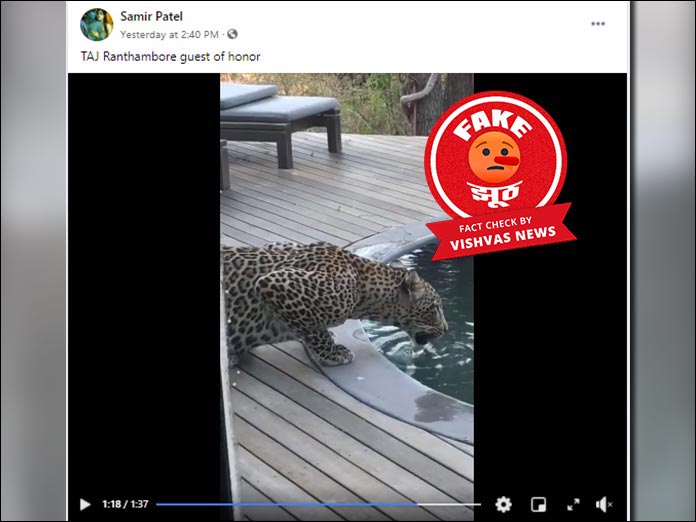 New Delhi (Vishvas News). A viral video on social media features a leopard roaming freely in a residential yard where he can be seen drinking water from a pool. The video is shared with the claim that the video is from Taj Hotel in Ranthambore, Rajasthan.

Vishvas News investigation revealed the claim is fake. We found the video is from a lodge in South Africa.

A viral video featuring a leopard roaming freely and drinking water from a pool is shared with the claim that it is from Taj Hotels in Ranthambore.
The archived post can be seen here.

As the post claimed to be from Taj Hotel in Ranthambore, we searched for Taj properties in there. We found Vivanta Sawai Madhopur Lodge, a Taj property in Ranthambore. We spoke to Taj’s PRO to verify the claim. “The viral video is not of Taj’s Ranthambore Vivanta property,” he said.
To know the location of this viral video, we uploaded this video in the InVID tool and searched its keyframes on Google using reverse image tool. We did not find this particular video anywhere, but we got many media reports stating that people were stunned to see a leopard resting in a lodge in South Africa. The description given in the news was very similar to the viral video. According to the news, the video is from Singita Boulders Lodge located in Sabi Sand Private Reserve in South Africa.

We found another video where a leopard can be seen walking freely in Singita Boulders Lodge in South Africa.
We search for more photos and videos of Singita Boulders Lodge. A view of this entire lodge can be seen in a video uploaded on a YouTube channel Celestielle. In this video, we could see the pool and location as shown in the viral claim exactly at 4 minutes 38 seconds.

You can see similarities between the two below.

The same pool area can be seen in several photos uploaded by Singita Boulders Lodge where the leopard drank water.
We contacted Singita Boulders Lodge for clarification. We connected to Daniel, an employee of the lodge. “The scene shown in the video is from our own lodge. Such views are often seen here” said Daniel.

Facebook user Samir Patel is one among the many users who shared the video with false claims and social scanning of his profile revealed him to be a resident of of Mehsana with 2,660 followers.

Conclusion: The viral claim is fake. The video is from a boarding lodge in South Africa and not Ranthambore, Rajasthan.