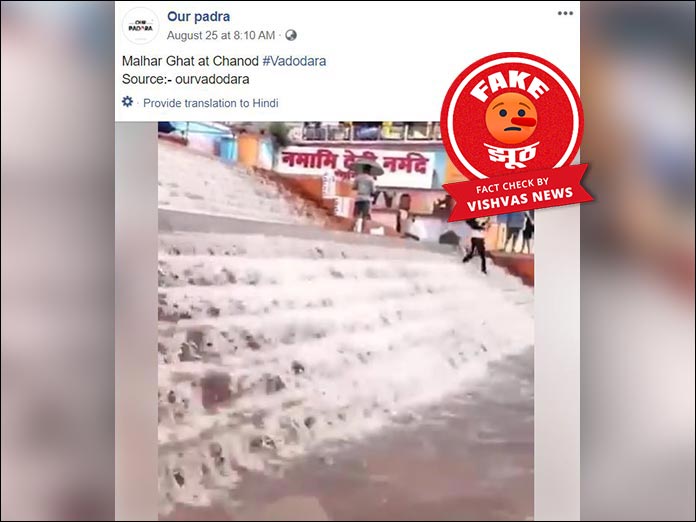 New Delhi (Vishvas News). A video of the Narmada River is going viral on Facebook and YouTube. Some users are sharing it with a claim as Malhar Ghat in Gujarat. In the video, the water flowing through the stairs and joining the Narmada.

Vishvas News investigated the viral posts. We came to know that an old video of Sethani Ghat in Hoshangabad in Madhya Pradesh is now viral by as Gujarat.

Facebook user Our Padra uploaded a video on August 24 claiming it to be from Vadodara in Gujarat: ‘Malhar Ghat at Chanod #Vadodara’
You can see the archived version of the Facebook post here.

To start investigating the viral video, we first uploaded it to the InVID tool. After that, many keyframes were removed and searched using Google reverse image search tool. We found the old videos on share chat and youtube.

We found the oldest video on Sharechat uploaded on 29 June 2019. It was uploaded from Raj Tiwari’s account. According to the caption, the video is of Sethani Ghat in Hoshangabad, Madhya Pradesh. You can watch the video here .

We found the viral video on YouTube also. The oldest video we got was from last year. It was uploaded to a YouTube channel named Prakash Barde. It was uploaded on 3 August 2019. The video was described as Sethani Ghat. You can watch the full video here.

When we searched Sethani Ghat on Google Maps, we found many pictures. We found Namami Devi Narmade on the wall in a picture. The design of the wall was also similar to the viral that claimed to be of Gujarat. It was clear that some people are sharing videos of Sethani Ghat with false claims as Malhar Ghat.

Hoshangabad SDM Aditya Richaria clarified to us that the viral video is of Sethani ghat in Hoshangabad, Madhya Pradesh.

In the last phase of the investigation, we decided to investigate the user, who shared the video with false claims. We came to know that the Facebook page Our Padara was created on 9 November 2019 and has more than 2900 followers.

Conclusion: Vishvas investigation revealed the claim to be fake. Old video of Sethani Ghat in Madhya Pradesh is viral as Malhar Ghat in Gujarat.