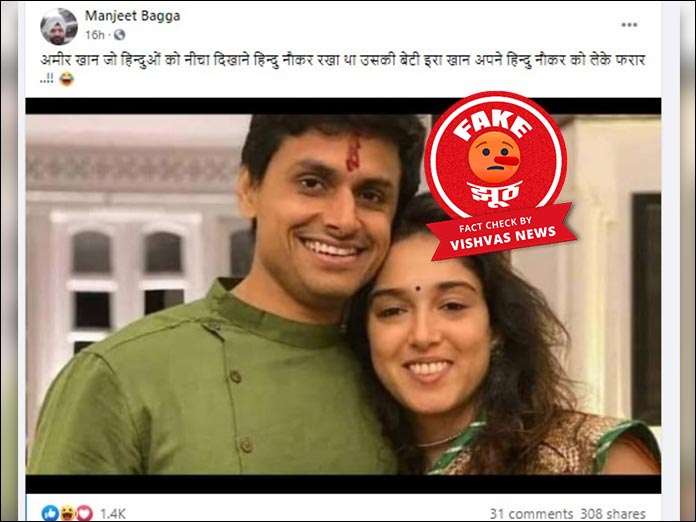 New Delhi (Vishvas News): A fake claim about famous actor Aamir Khan’s daughter Ira Khan and her fitness trainer is going viral on social media. Social media users are sharing a picture of Ira Khan, in which she is seen standing with a person. It is being claimed that Ira Khan has eloped with his father’s Hindu servant.

Vishvas News investigated and found the claim to be false. The person seen in the picture with Ira Khan is her fitness trainer Nupur Shikhare.

Vishvas News has received this claim for fact check from different users on its Fact Checking WhatsApp chatbot (+91 9599299372). A Facebook user named Manjeet Bagga posted a viral picture on February 24, 2021, writing, “Amir Khan, who hired a Hindu servant to humiliate Hindus, his daughter Ira Khan eloped with his Hindu servant .. !!”

Vishvas News started its investigation by using Google reverse image search tool. We found many results related to this picture on the Internet. We found this viral picture in a report published on India Today website dated February 12, 2021. This report can be viewed by clicking here. According to this report, the man standing with Ira Khan is Nupur Shikhare, who is her fitness trainer. According to the report, Ira and Nupur have been with each other for a long time. In this report, this viral picture has been taken from the Instagram post of Nupur Shikhare and it is reported that last year Nupur and Ira celebrated festivals like Christmas and Diwali together. The photo posted on Nupur’s Instagram on 17 November 2020 can be seen below:

Vishvas News contacted Smita Srivastava, the correspondent covering Bollywood in Dainik Jagran. We shared this viral claim with her. Smita told that Aamir Khan’s PR team confirmed that the viral post is fake. They told that in the viral picture, Ira Khan is with her fitness trainer Nupur Shikhare.

Vishvas News scanned the profile of the Facebook user Manjeet Bagga who shared the viral claim. We found that his profile was created in January 2007 and he had 77133 followers till today.

Conclusion: Vishvas News investigated and found the claim to be false. The person seen in the picture with Ira Khan is her fitness trainer Nupur Shikhare.