Fact Check: Viral claim about group of robbers in Harayana is fake 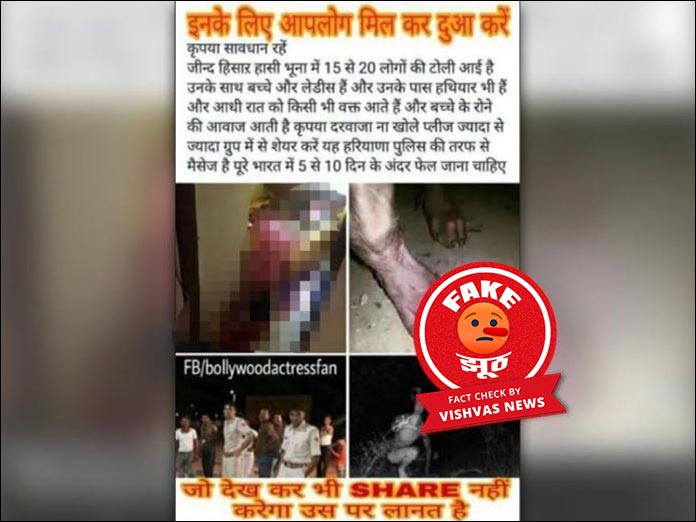 New Delhi (Vishvas Team). A viral post on social media includes some shocking pictures along with a claim that around 15 to 20 robbers were found in Jind, Hisar, Hansi and Bhuna in Haryana. It claims that women and children are also included in this group. It warns people not to open the door on hearing children’s cry at night as the incidents of robbery are followed.

Vishvas News investigation revealed the claim to be fake and at present there is no news of any such robbers group in Haryana.

Facebook user Misha Ali shared the claim with four pictures: Please pray for them. Please be careful. Jind, Hisar, Hasi and Bhuna has a group of 15 to 20 people accompanied by children and ladies. They also have weapons and come at any time in the middle of the night and if you hear children crying, please do not open the door. Please share this in as many groups as possible. This is a message from the Haryana Police that should spread across India within 5 to 10 days.

We started fact-checking all the four photos in the viral post.

The picture depicts a woman lying unconscious with blood on the floor. When we did a reverse search of this picture, we found an article published on a blog in 2015 with this viral photo. The article stated that the robbery case was an incident in Mumbai.  We also found tweet posted with similar claim. However, we did not find any reliable media reports associated with this photo.

The second picture looks similar to some animal’s paw. We found that the second photo is also on the Internet since 2015. This picture was first shared on Instagram , but the story claim cannot be confirmed. The picture is viral not only in India but also in South America, where it claims the picture is of a dog’s paw affected by Mange disease. It is a medical condition where mites affect a dog’s skin due to which it may get swollen. This picture is old and has no relation with the claim made in the viral post.

While this picture of two policemen standing in the crowd cannot be located for authenticity, we found this picture in a tweet  posted in 2017. We could conclude that the photo is not of any recent event.

The fourth picture is quite odd. It shows a person with horns.  We found this picture is around the Internet since 2015. We found many articles about the picture.  In an article published on Fox 8 website in 2015, it has been named as the Goatman. However, no media report has confirmed the his whereabouts.

The viral post claimed that Haryana Police gave this message. We contacted Jind SP Ashwin, who told us that the message going viral is fake. “No such incident has been reported so far in Jind. Nor has there been any such message from the police,” he said.  He appealed that people should not believe such misleading messages, if any such incident comes to their notice, then they should immediately inform the police.

Vishvas News also contacted Hisar SP Gangaram Poonia, who clarified that the message is fake, saying that so far no such incident has been reported in Hisar. Fatehabad SP Rajesh Kumar also denied of having any such incident in Bhuna, Hansi area.

Conclusion: This viral post about robbers’ gang in Haryana is fake. No such incidents have been reported in Haryana so far.