The viral claim about the hanging tree in Hansi’s Samadha temple of Hisar is misleading. It is the result of ‘prop root’ phenomenon. 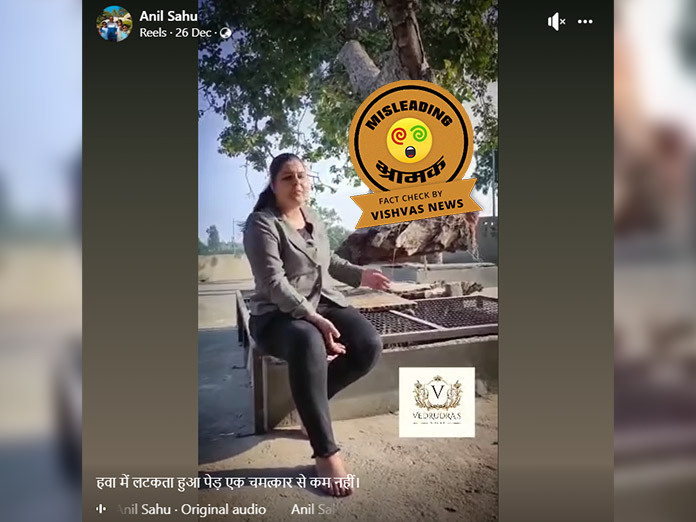 New Delhi (Vishvas News): In India, sometimes religion and superstitions go hand in hand; now, a Facebook post is claiming that there is a tree hanging in the premises of Samdha temple, Haryana. However, in an investigation, Vishvas News found the claim to be misleading as there is a scientific and rational explanation behind the hanging tree in the Hansi city of Hisar district.

Facebook user Narendracrown Patel shared a reel by Anil Sahu on social media, which read: ‘A hanging tree is a miracle’.

Vishvas News first analysed the viral video, which shows a woman talking about the hanging tree; she calls it a miracle and uses hand gestures to establish that it is not touching the ground.

We used the INVID tool to search the keyframes from the viral video and found a YouTube video that also shows the hanging tree. However, at around 1:10 seconds, it shows that one section of the tree is hanging, but the other part is attached to the ground.

For the same, we also contacted Jagran reporter Chetan Singh from Hisar, who elaborated, “This tree is known by the name of Akshaya Vat Vriksha or Badka tree and is present in Baba Jagannathpuri Samadha Temple of Hansi. It is believed that Jagannath Puri Baba came to this temple and took ‘samadhi’ here. That’s why people consider this tree as miraculous and tie a red thread around it.”

About the ‘miracle’ tree, he pointed out, “This is a banyan tree that has broken from the middle, but when the branch touches the ground, it takes root. Means the branch of the tree is a new tree in itself… whose branch remains attached to the old tree.”

To get an intricate view, Vishvas News also contacted Ramesh Yadav, Forest Officer Hansi, who said, “When the Forest Department received the information about a hanging tree in the Samadha temple, we immediately reached the spot and found it to be a Banyan tree whose roots are spread in the lower part and interconnected with the branches of the upper part. There is no such thing as a hanging tree.”

While researching the web to understand the unique formation, Vishvas News also came across the term ‘Prop Root’, which describes a similar scenario. As per Dictionary.com, a ‘Prop root’ is a root that grows from and supports the stem above the ground in plants such as mangroves.

To get a better understanding, Vishvas News also approached Dr Rakesh Singh Sengar, a PhD in Plant Sciences, who mentioned, “This plant is surviving because of prop root, which is also called as adventitious root or aerial root by which the plant is getting the proper nutrients and essential elements supply; meanwhile the upper part of the plant is performing photosynthesis for survival.”

RS Sengar is also the Professor and HoD of Agriculture Biotechnology at Sardar Vallabhbhai Patel University of Agriculture and Technology, Modipuram Meerut.

On performing a social scan of the user, we found that the user lives in Mehsana, Gujarat has 4.7K friends on Facebook and is followed by 453 people.

Conclusion: The viral claim about the hanging tree in Hansi’s Samadha temple of Hisar is misleading. It is the result of ‘prop root’ phenomenon.