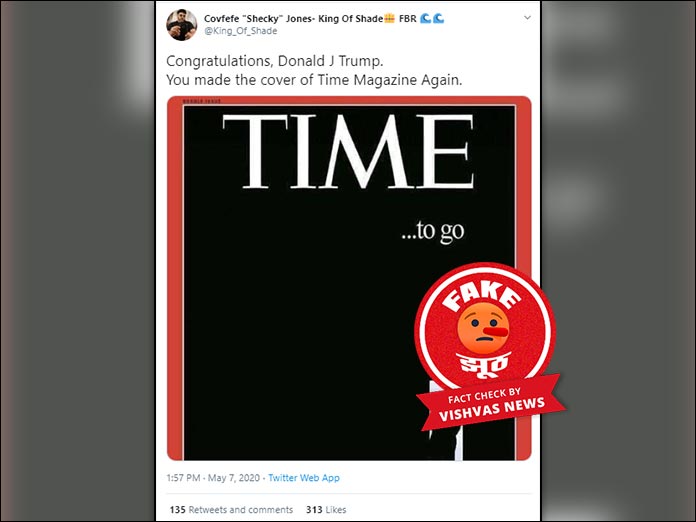 New Delhi (Vishvas News): A post widely circulated on social media shows a photo that appears to be the cover from an issue of Time Magazine. The photo features US President Donald Trump exiting from a door. The post has a headline that reads: TIME to go… When Vishvas News investigated we found the viral post to be fake.

The post shared on Twitter shows a photo that appears to be the cover from an issue of Time Magazine. The photo features US President Donald Trump exiting from a door. The post has a headline that reads: TIME to go… The caption of the photo reads: “Congratulations, Donald J Trump. You made the cover of Time Magazine Again.” The tweet has been tweeted 135 times and has 313 garnered likes.

We further investigated and found that TIME Magazine usually tweets regarding its latest issue. No such post as in the viral graphic was tweeted from TIME Magazine’s official Twitter handle.

We also searched the viral photo on TIME magazine’s archive. There was no such photo there.

The viral photo was posted in May 2020. We compared the photo with TIME Magazine’s May issue. We found that though the covered featured Donald Trump but was completely different from the viral photo. Have a look:

Vishvas News contacted Peter Clark, News Editor, Time Magazine. He said: “The viral image is not a cover that ran in our U.S. edition as you can see in the archive. This is a fake post.”

The post is shared on Twitter by a user named Covfefe “Shecky” Jones- King Of Shade FBR. When we scanned the profile of the user we found that the user has 22.9k followers till date and the profile was created in November 2015.