Viral image of BJP leader Chitra Wagh alongside Shiv Sena leader Sanjay Rathod is edited. Viral claim is fake. In original picture she is seen alongside her husband, Kishor Wagh. 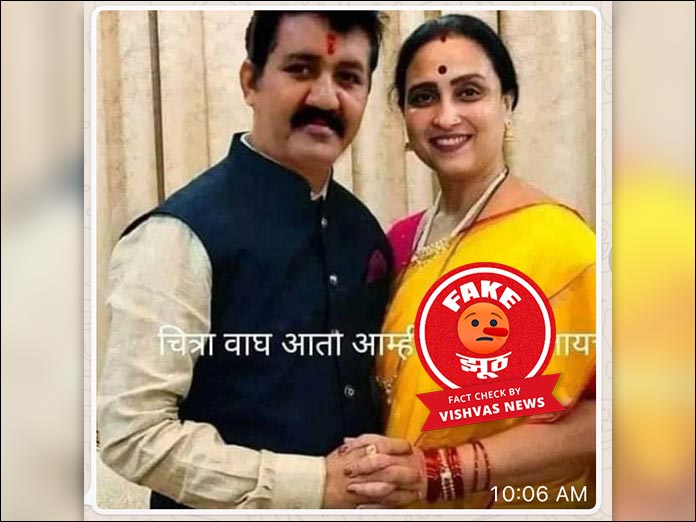 Vishvas News (New Delhi): Vice-president of BJP’s Maharashtra unit, Chitra Wagh is in news for her fierce fight against the former Maharashtra forest minister and Shiv Sena leader Sanjay Rathod. Rathod recently resigned over his alleged links with the suicide of TikTok star Pooja Chavan. Amidst this growing controversy, an image of BJP senior leader, Chitra Wagh has been doing rounds over various social media platforms especially WhatsApp since a last few days. Vishvas News did a fact-check of the viral photo where she is seen along with Sanjay Rathod himself. We found the image to be fake.

Claim:
An image of BJP leader Chitra Wagh has been doing rounds on WhatsApp where she is seen holding hands with the Shiv Sena leader, Sanjay Rathod. The image is going viral on various social media websites, especially WhatsApp.
Written over photo in Marathi is: चित्रा वाघ आता आम्ही काय समजायचं (Chitra Wagh, what should we understand now!)
Below is the viral image.

Investigation:
Vishvas News started its investigation with google reverse image search along with inserting a few keywords in the search engine. On the first page itself we were lead to the website, https://www.dreshare.com/chitra-wagh/, where we found the original image along with her husband.

We also found the image on one of the news website. Read the complete report here.

We also found the image on her Facebook profile.

The Facebook users had wished her on her wedding anniversary on the same photo.

We also found a news on the website of Maharashtra Times, that stated, Chitra Wagh has registered a complaint over her pictures going viral on social media.

We also found a tweet on her verified Twitter profile, where she stated that she had registered a complaint with the Mumbai cyber cell over viral pictures.

The difference between the edited and the original picture can be seen as below:

In the final step of the investigation, Vishvas News reached out to the BJP leader Chitra Wagh. Interacting with us, she informed that the viral image was fake and edited and that she has already made it clear over various platforms, through various means.