The viral list of education details of various Bihar ministers turned out to be misleading. The portfolios of the ministers in the list, too, are wrong. No such RTI reply was given by the Bihar government. 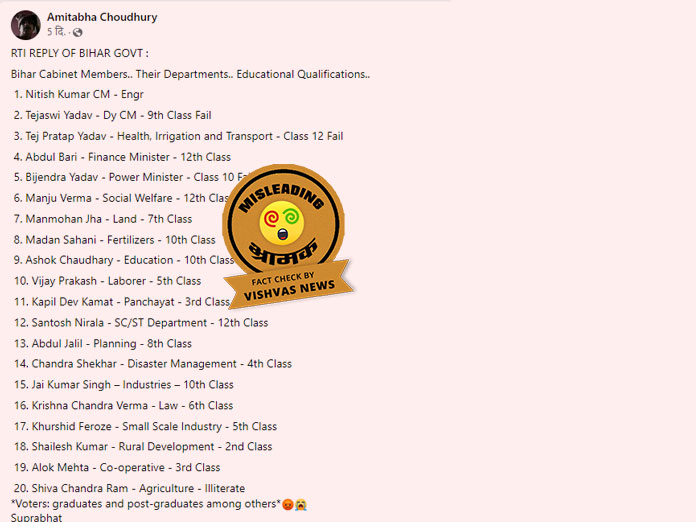 Voters: graduates and post-graduates among others😡😭

Vishvas News started its investigation by checking the education of all the ministers on by one as mentioned in the viral post.

We started with CM Nitish Kumar. According to the election affidavit of Nitish Kumar, his highest education qualification is indeed BSc (Engg) from Bihar College of Engineering, Patna. Nitish Kumar is indeed the Chief Minister of Bihar as claimed in the post.

The data in viral post suggests that Abdul Bari Siddiqui is just 12th class. But we found that he has a degree from AN College, Magadh University. Abdul Bari is Finance Minister as also claimed in the viral post.

Manju Verma is indeed 12th pass as stated in the viral message. Manju Verna is Member of Bihar Legislative Assembly and not Social Welfare minister.

The viral massage states that Ashok Chodhary has studied till tenth class. However, he is an MA from Patna University and a Phd from Magadh University in Bodhgaya. Ashok Chodhary is an MLA and not education minister.

Kapil Deo Kamat is 8th pass and not 3rd pass as suggested in the viral post. Kamal Deo Kamat was former Bihar Panchayati Raj minister who passed away due to Covid in the year 2020.

Santosh Nirala according to the viral message has studied till 12th class. However, he has a bachelors degree from AN College, Patna. Santosh Nirala is former minister of transport and does not head SC / ST department.

Chandra Shekhar according to the viral message has studied till 4th standard but is a post graduate as per ECI website. Chandra Shekhar is minister of education in Bihar and not of disaster management as claimed in the post.

Jai Kumar Singh has not studied till 10th class but is a graduate according to his election affidavit. Jai Kumar is also an MLA and not industries minister as mentioned in the post.

Krishna Chandra Verma is not Bihar minister as stated in a viral message.

Alok Mehta is a graduate and has not studied just till 3rd class as the viral message suggests. Alok Mehta is Bihar MLA and not minister.

And finally, Shiv Chandra Ram is a graduate according to the affidavit and not illiterate as claimed in the viral post. He is former Art, Culture & Sports Minister and ex-MLA and not Agriculture minister as claimed in the post.

In the next step of investigation Vishvas News connected with Dainik Jagran’s Bihar editor Alok Mishra. He said, “Out of 20 in the list, 12 are not in the cabinet. Ashok Chodhary and Alok Mehta have a PhD. Tejashwi Yadav is 9th standard pass while Tej Pratap is 12th. The cabinet portfolios too are wrongly described in the list. This message is misleading. Not all the details are true.” According to him, no such RTI reply has been issued by the Bihar government.

In the last step of investigation, we did a background check on the user who has shared the viral message. Amitabha Choudhury is a resident of Durgapur, West Bengal and has 542 friends on Facebook.

Conclusion: The viral list of education details of various Bihar ministers turned out to be misleading. The portfolios of the ministers in the list, too, are wrong. No such RTI reply was given by the Bihar government.