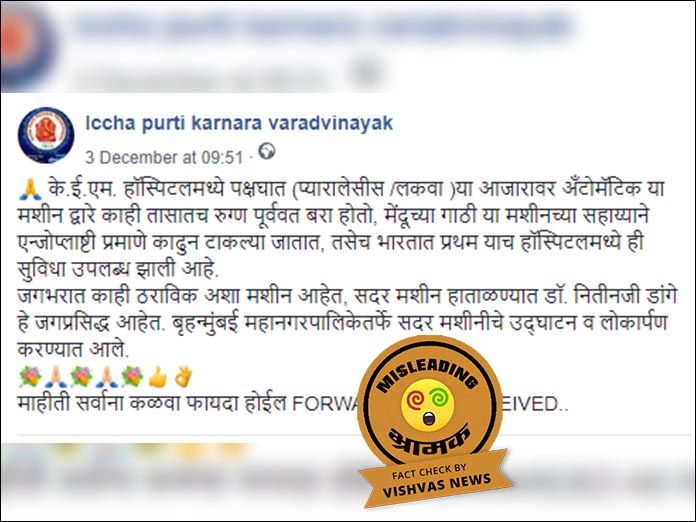 New Delhi (Vishvas News): Vishvas News came across a message in Marathi being shared over various social media websites which claimed that at KEM Hospital, Mumbai an automatic machine can cure paralysis in just a few hours. In the entire world there are just a few machines of his kind and Dr Nitin Dange is an expert handling the same. The inauguration of the machine was done by BMC, the message claims.
Vishvas News in its investigation found the message to be fake and misleading. KEM Hospital does not have a machine that can cure the paralysis patient.

Translation:
Paralysis is cured in KEM Hospital within a few hours using an automatic machine. The brain tumors are removed using the machine, just like that in angioplasty. This facility has been made available in this hospital for the first time in India, there are just a few of these in the entire world. Dr Nitin Dange is the most sought after person to handle the machine. The machine was inaugurated by Brihanmumbai Municipal Corporation. Spread the word so that everyone is benefitted from the same. Forwarded as received.

The message has been widely shared since the last two years:
We found the same post uploaded on the Facebook page आरोग्यदूत uploaded on November 1, 2018. The post has 1800 likes and 3400 shares.

Vishvas News noticed that this message was being widely shared on various social networking platforms. And hence we began with simple keyword search. We found a news report in The Hindu uploaded on October 11, 2018.
“KEM Hospital gets advanced stroke centre“
The news report also consisted of the quote of Dr Nitin Dange as mentioned in the viral message.
The News said: While a majority of patients suffering from stroke reach the hospital late, leaving little opportunity for treatment, the new state of the art centre with an advanced machine will offer interventions up to 24 hours in select patients.

During the news search we also found a report in Mumbai Mirror uploaded on November 3, 2018.

“WhatsApp rumour of ‘paralysis cure’ sends patients haring to KEM“
The report said, “KEM Neurosurgeon clarified that it can only help patients within the first 24 hours of a stroke and cannot be used to treat old cases.”

It was now clear from both the reports that any paralysis patient cannot be cured at KEM Hospital using the machine installed, only a patient who has suffered the stroke can be cured within 24 hours.

Vishvas News in its next step of investigation contacted, secretary of Dr Nitin Dange, Heena Sheikh. She said that the message has been widely shared since the last two years. But, any patient cannot be cured of paralysis. A patient can be tried to cure in 24 hours from the onset of the stroke. Earlier the duration to do the same was just six hours.

Conclusion: Vishvas News in its investigation found that the viral post is old and misleading. KEM Hospital does not have a machine that can cure any paralysis patient. A patient can be tried to cure in 24 hours from the onset of the stroke.