Viral image stating that a Maulana asked to not trust Buddhists is fake. 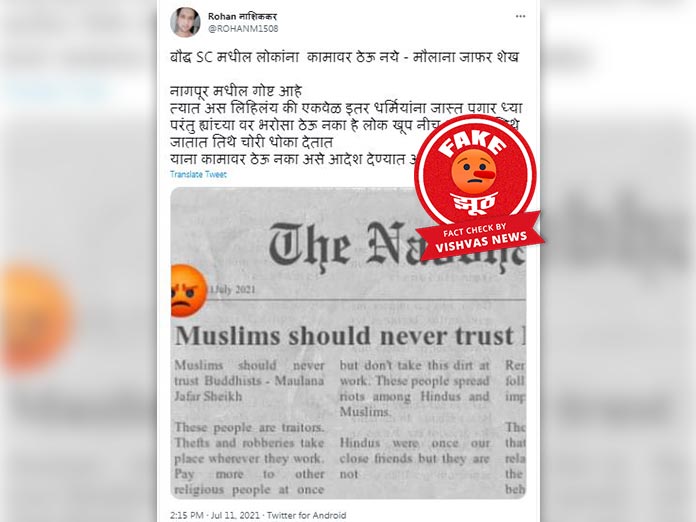 Translation: Muslims should never hire Buddhists, SC ST said Maulana Jafar Sheikh. This is an incident from Nagpur. You can hire the people from other castes giving them high pay but do not trust these people.
This news is from Nagpur.

Vishvas News started searching if there is a news about any such statement by a religious leader. Since the post claimed that the statement was given in Nagpur, Vishvas News also narrowed down its search to Nagpur. However, we did not find any such news.

The newspaper clipping was created digitally.

In the end Vishvas News interacted with ANI Nagpur correspondent, Saurabh Joshi. He informed us that there was no such event organised recently in city, where any religious guru spoke about the Muslims or Buddhists. The newspaper clipping too does not look like that of newspapers in Nagpur. The viral post is fake.

Finally, we did a background check about the Twitter user who shared this viral image. Rohan नाशिककर is a resident of Mumbai and is followed by 186 people, while he follows 252 on Twitter.

Conclusion: Viral image stating that a Maulana asked to not trust Buddhists is fake.