The viral post claiming that the viral picture of Arvind Kejriwal and Nitin Gadkari is that of Kejriwal submitting apology to latter is misleading. The image is from their meet to regularise e-rickshaw. 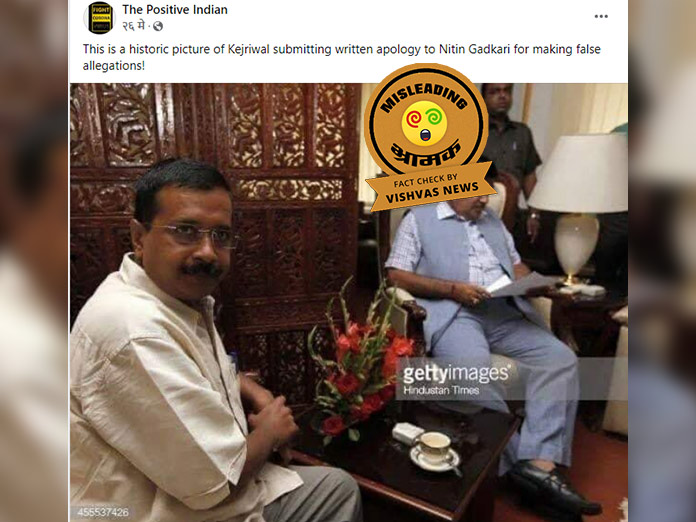 Facebook page ‘The Positive Indian’ shared the viral picture on the page and wrote: This is a historic picture of Kejriwal submitting written apology to Nitin Gadkari for making false allegations!

Vishvas News started searching for the picture on internet. The viral picture had the Getty Images watermark. Hence, we searched directly through keywords on the website of Getty Images.

NEW DELHI, INDIA – SEPTEMBER 16: Aam Aadmi Party convener Arvind Kejriwal with Union Minister for Road Transport and Highways Nitin Gadkari during a meeting on regularizing e-rickshaws at Transport Bhawan on September 16, 2014 in New Delhi, India. The Delhi High Court last week said the ban on plying of “illegal” e-rickshaws in Delhi would continue till the law is amended to bring them under the ambit of the Motor Vehicles Act, adding that “what is prohibited by law is not permitted in action (Photo by Arvind Yadav/Hindustan Times via Getty Images)

We checked for news reports on the same and found reports from 2014.

The reports and the image is from the year 2014, however Arvind Kejriwal apologised to Nitin Gadkari in the year 2018.

Reports said: In a letter to Union Minister Nitin Gadkari, Kejriwal expressed regret for unverified allegations made against Gadkari. “I have nothing personal against you. I regret the same. Let us put the incident behind us and bring the court proceedings to a closure,” Kejriwal wrote in the letter.

Check the image of the letter below.

In the next step of investigation we contacted, AAP spokesperson Prabhat Agrawal. He confirmed that this picture is from 2014 when he met Union minister Nitin Gadkari to regularise e-rickshaw at Transport Bhavan in New Delhi. He also said that the viral post looks like a propaganda to defame Aam Aadmi Party and Arvind Kejriwal.

In the last of investigation, Vishvas News conducted a social background check of the Facebook page that shared the claim. The Positive Indian, is followed by over one lakh people.

Conclusion: The viral post claiming that the viral picture of Arvind Kejriwal and Nitin Gadkari is that of Kejriwal submitting apology to latter is misleading. The image is from their meet to regularise e-rickshaw.