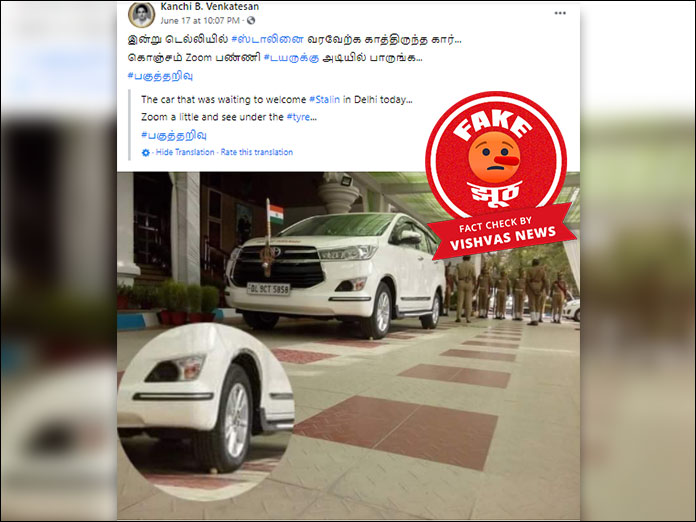 Facebook user Kanchi V Venkatesan posted a picture of a lemon placed under the wheel of a car, writing, “The car that was waiting to welcome Stalin to Delhi today, zoom in a bit and look under the tyre”.

Vishvas News started its investigation regarding the viral post. MK Stalin reached Delhi on June 17 on his first two-day visit after becoming the Chief Minister of Tamil Nadu. On June 17, Stalin met Prime Minister Narendra Modi. When Stalin came to Delhi for the first time after becoming the Chief Minister, a large number of media covered the CM’s visit.

We spoke to Niranjan Kumar, a journalist with Tamil Nadu’s “Purniya Thalaimurai TV” who was covering the Chief Minister’s visit to Delhi. Niranjan said that the viral post is fake. Along with this, Niranjan Kumar also said that the car whose picture is going viral is not the car in which Stalin travelled during the Delhi tour. The car that CM Stalin travelled was a Land Cruiser, whose registration number is DL 9C F 0900. Whereas the photo of the car which is going viral is Toyota Innova, whose number is DL NC T 5838.

A Delhi-based journalist Arvind Gunasekar has tweeted a picture of the car of the Tamil Nadu government that MK Stalin travelled during his visit to Delhi.

Photos of Chief Minister Stalin’s visit to Delhi were shown live by several channels including Tamil Nadu’s Sun TV, in which Stalin is seen travelling a Land Cruiser. In our investigation, the claim was found to be false.

We scanned the profile of the user who shared the viral post. We found that the user is based out of Tamil Nadu.

Vishvas News investigated the viral post and found that the picture of a lemon placed under the tyre of Chief Minister Stalin’s car is fake.