Post claiming to show ancient Egyptian dental work from 2000 BC is misleading. 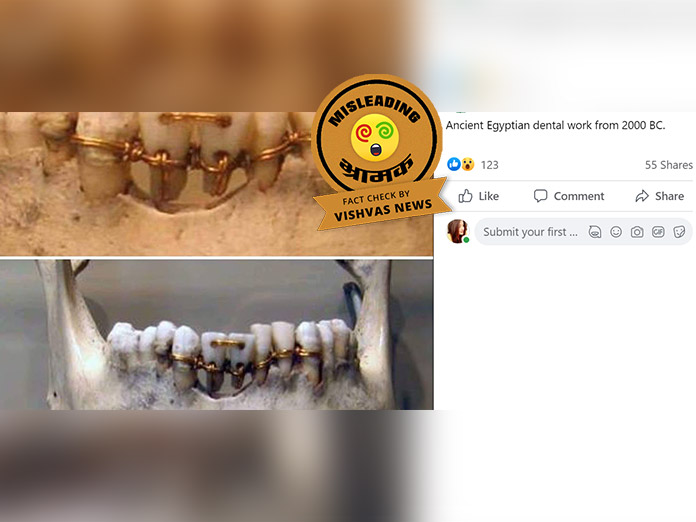 New Delhi (Vishvas News): A post going viral on social media shows photos of teeth held together with gold wire. The claim alongside the post states that the pictures show ancient Egyptian dental work from 2000 BC. Vishvas News investigated the post and found the viral claim to be misleading. The photos shown in the post are of the model made by an Italian dentist in the 1900s.

The post going viral on Facebook shows pictures of teeth held together with gold wire. The claim along with the post read: “Ancient Egyptian dental work from 2000 BC.”

Vishvas News started its investigation by using Google Reverse Image Search tool. We found the photos on the website of Forbes in an article titled ‘Ten Boneheaded Interpretations Of Ancient Skeletons‘. The article debunked various claims about skulls and skeletons. As per the article, the pictures shown in the post are made by an Italian dentist Vincenzo Guerini in the 20th century that was “supposedly modeled on an Egyptian mummy”.

The article read: “The “treatment” in the mandible shown here was done at the turn of the 20th century by Dr. Vincenzo Guerini, who wrote A History of Dentistry and who made models of ancient dentistry examples he supposedly saw in his travels. So this example is only 115 years old, not 2000 years old, and definitely not Egyptian.  Whether Dr. Guerini actually saw an Egyptian mummy with this sort of dental appliance is still unknown, as such a mummy does not currently exist.“

The article further stated that the model was kept at the National Museum of Dentistry at the University of Maryland in Baltimore.

Vishvas News contacted Dr. Scott Swank, Curator, National Museum of Dentistry through email. He said: “The image is of a model of Egyptian bridgework made by Vincenzo Guerini around 1900.”

Conclusion: Post claiming to show ancient Egyptian dental work from 2000 BC is misleading.