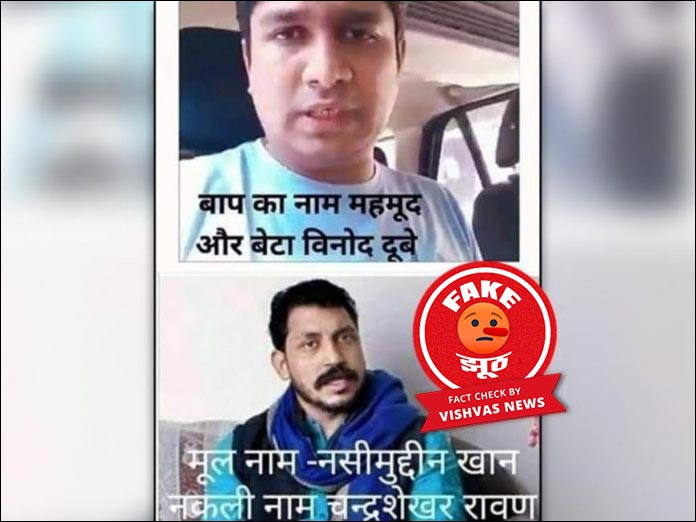 New Delhi (Vishvas News): A post is being widely shared on social media, where one can see the pictures of Vinay Dubey on the upper half while Chandrashekhar Ravan’s picture below. Vinay Dubey was taken into custody during the lockdown chaos at Bandra Railway Station by the migrant labourers, and Chandrashekhar Ravan is co-founder and national president of Bhim Army. Vishvas News in its investigation found that the claims in the viral post are fake.

Investigation:
In the first step of investigation we tried to find out information about Vinay Dubey on the internet. We found some media reports about him. According to these, Dubey is a resident of Airoli in Navi Mumbai and claims to be a social worker. He runs a business of corporate trading. Dubey, in the year 2019 contested elections for Vidhan Sabha from Kalyan however, he lost. According to his profile on My Neta, his father’s name is Jatashankar Dubey.

We found a tweet by Dubey in April too, where he retweeted the tweet of home minister Anil Deshmukh. Deshmukh had shared a picture, which said that Jatashankar Dubey had donated Rs 25,000 from his savings to the coronavirus patients. Vinay Dubey retweeted the picture and wrote that he was proud of his father.

This is hence clear that the name of father of Vinay Dubey is not Mehmood but Jatashankar Dubey.

Later, we tried to search for details about the Bhim Army chief Chandrashekhar Azad Ravan. We found out that the claims made in the viral post are false, his name indeed is Chandrashekhar and not Nasimuddin Khan.

Vishvas News later did the social scanning of the profile of S Mehta who shared the post on Facebook. We found out that the user has over 110 followers.

Conclusion: Vinay Dubey and Chandrashekhar Ravan are not Muslims, viral claims are false.