The claim that Rs 30 crore was spent on Prime Minister Narendra Modi’s visit to Morbi is fake and fabricated. The screenshot purported to be the news published in ‘Gujarat Samachar’ is also fake. The Morbi district administration has also refuted any such claims. 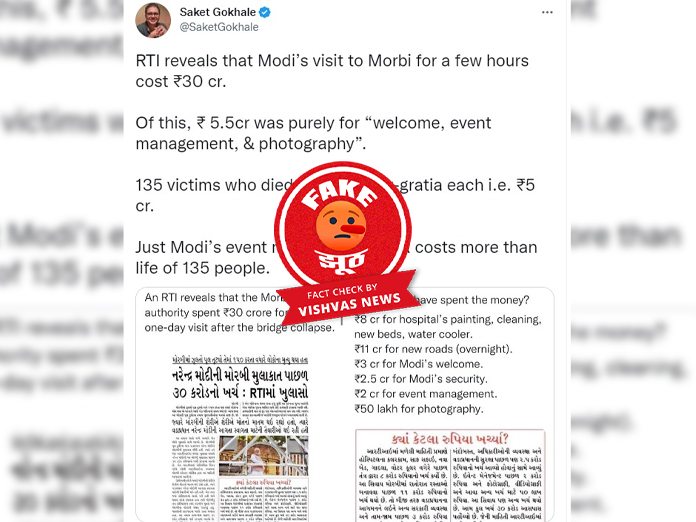 New Delhi (Vishvas News): Many claims around Prime Minister Narendra Modi’s Morbi visit are going viral on social media. One among them claims that the district administration spent Rs 30 crore on the PM’s visit, and also that this information was obtained from an application filed under the Right to Information (RTI) act.

Vishvas News investigated and found this claim to be false, and election propaganda aimed at influencing the voters. The RTI cited in the viral post is fabricated. The Morbi district administration has denied the claim of having filed and responded to any such RTI. On the other hand, the viral screenshot purported to be the news published in the Gujarati newspaper is also digitally created. No such news has been published in the Gujarati newspaper.

Social media user ‘Radheshyam Yadav’ shared a post (archived link) having a screenshot of a tweet by Trinamool Congress leader Saket Gokhale. It claimed that the post has been obtained through an RTI query. The post detailed how Rs 30 crore was spent on Narendra Modi’s visit to Morbi; out of which, Rs 5.5 crore was used purely for the welcome, event management, and photography.

However, this tweet is now deleted (archive link here). The viral post carries a clip from a Gujarati newspaper, which we translated with the help of Google Lens.

He said that this claim has also been denied by the Bharatiya Janata Party (BJP). The party’s Gujarat Twitter handle has issued a statement that reads, “This is FAKE NEWS. No such RTI has been done. No such news has been published. It is fully fabricated. TMC is a party of liars. It starts from @MamataOfficial to lowly spokespersons like you.”

As per news reports, PM Modi visited Morbi after the tragedy that killed 140 people in the bridge accident in Gujarat. During his visit, he also held a high-level meeting with officials in Ahmedabad.

As the viral post claims about getting the expenses incurred by the Morbi local administration, Vishvas News contacted Morbi District Magistrate GT Pandya, who informed, “No such RTI was filed in the District Magistrate’s office and when the RTI was not filed then where is the question of answering. This post is fabricated and fake.”

However, in a new development on Monday night, a few media outlets like this and this reported that Gujarat Police arrested Saket Gokhale over the tweet about the Morbi bridge collapse.

Importantly, the results of the Gujarat Assembly Elections 2022 are set to come out on December 8, 2022.

Conclusion: The claim that Rs 30 crore was spent on Prime Minister Narendra Modi’s visit to Morbi is fake and fabricated. The screenshot purported to be the news published in ‘Gujarat Samachar’ is also fake. The Morbi district administration has also refuted any such claims.