Fact Check: Weather Department has not made this cyclone alert, viral claim is fake 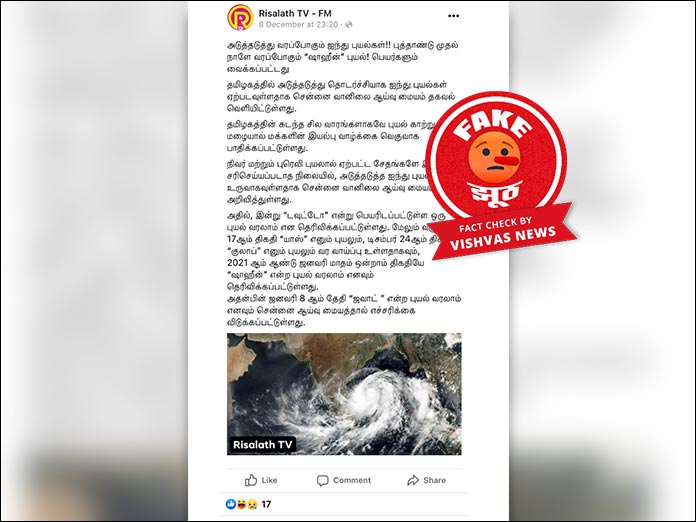 Vishvas News investigation revealed the claim is fake. IMD Chennai refuted the claims clarifying that they have not given any such alerts.

An article in the Dainik Jagran published on 5 December states, “Cyclone Burevi has now weakened. It is likely to remain in the Gulf of Mannar for the next 12 hours. The meteorological department has given information about this. The Indian Meteorological Department (IMD) said that due to the deep pressure, the cyclonic storm has weakened in the Gulf of Mannar and is now expected to remain practically stable in the same region. The Meteorological Department also said that the storm could weaken over the next 12 hours in a low pressure area.”

But we didn’t not find news reports about new cyclone alerts as in the viral claim.

We searched in the website of Regional Meteorological Centre, Chennai and we didn’t find any such cyclone alerts.

Vishvas News contacted Area Cylone Warning Centre from the contact provided in the website for verification. Pranav Bharti, Scientific assistant from the weather department denied the alleged claims. “We haven’t made cyclone alerts for Tamil Nadu as in the claim,” said Bharti.

Social scanning of the FB page that shared the viral claim revealed that it has 523 followers.

Conclusion: Vishvas News investigation revealed the claim is fake. IMD Chennai refuted the claims clarifying that they have not given any such alerts.