Fact Check: Post claiming Hyundai showroom in Ghaziabad employed a dog is misleading, it has happened in Brazil 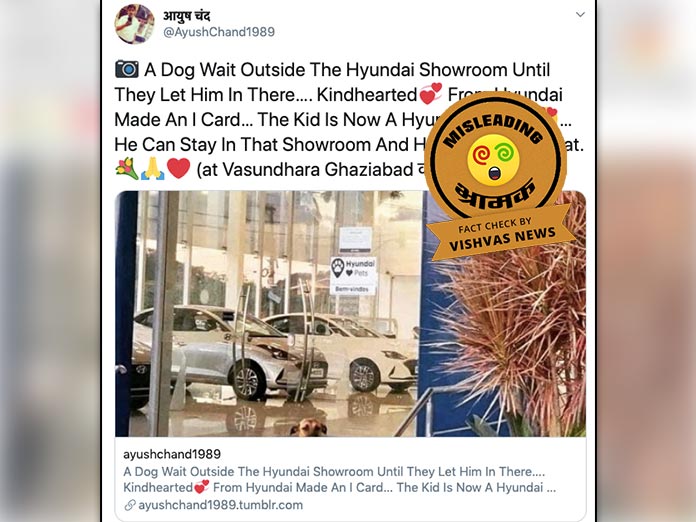 New Delhi (Vishvas News): A viral post on social media claims the Hyundai Showroom at Vasundhara, Ghaziabad in Uttar Pradesh, employed a dog after it waited outside. We spotted the claim first on twitter and on other social media platforms. Vishvas news investigation revealed that the event happened in Serra, Brazil and not in India.

A viral post on twitter claims a dog waited outside the Hyundai Showroom until they let him inside. It claims that the kid (dog) is an employee of Hyundai at Vasundhara, Ghaziabad. The archived post can be accessed here.

When we searched on the Internet, we found several users on various media platforms like Facebook and news websites have shared the pictures.

Vishvas News connected to the Hyundai manager in Ghaziabad who clarified to us that they have not employed a pet at their office.

“We have not employed a dog at Ghaziabad. It must be from a foreign country. The interiors of the showroom in the pictures are different and not in India’s rural or urban outlets. We follow different shades for our interiors,” said Saroj, manager of Hyundai showroom in Ghaziabad.

We also found that Prime Hyundai in Brazil has employed the dog through their Instagram profile.

An article in A Gazeta states, “Emerson Mariano, the manager in Serra was preparing to end the service when a wet and malnourished stray dog appeared at the door step. Seeing the condition of the animal, the manager was touched…May the pet has become attraction in the establishment.”

While many shared the pictures, one among them was Ayush Chand, a twitter user from Ghaziabad, Uttar Pradesh.

Conclusion: Hyundai employed a dog in Brazil, not in India.