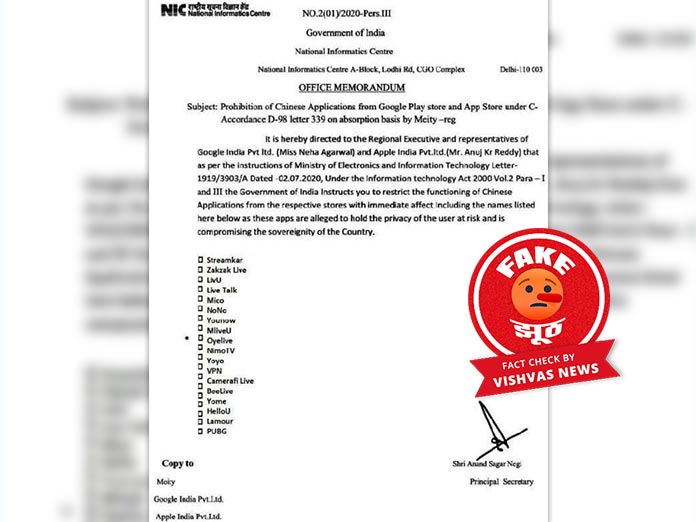 New Delhi(Vishvas News) A viral picture of an office memorandum on social media claims India has been banned 18 more Chinese applications apart from the 59 Chinese mobile applications that were banned earlier on 29 June 2020. Vishvas news spotted the claim on a whats app forward that claimed to be from the National Informatics Centre (NIC) as per the Ministry of Electronics and Information Technology (MeitY). Our investigation revealed that no such order was issued by either Meity or NIC.

A viral picture of an office memorandum on social media claims the NIC directed the regional executive and representatives of Google India and Apple India as per the letter of Ministry of Electronics and Information Technology instructs to restrict the functioning of Chinese applications with immediate effect. The following list has 18 Chinese applications including PUBG, LiveU, Streamkar, Live Talk, Zakzak Live, etc.

While we searched on the Internet for the information, we found that there is no official statement from the government claiming a ban on additional Chinese applications like PUBG, LiveU, etc., as on date 7 July 2020.

The Appendix do not the have the list of applications stated in the claim.

Moreover, the picture in question looks fake even at the first sight, due to its spelling errors like ‘Meity’ misspelled as ‘Moity’ and ‘Hello Yo’ app as ‘Hello U’.

When Vishvas news connected to officials in the Ministry of Electronics and Information Technology, we could verify that the claim is fake.

A spokesperson in Shri Rakesh Maheshwari, Scientist G and Group Coordinator office said, “It is not true. There is no such information on the ban of additional applications. Only 59 mobile applications were banned.”

We could conclude, the memorandum is fake as on date 7 July 2020.

Conclusion: The viral picture of office memorandum claiming the ban on 18 additional Chinese applications apart from the 59 banned applications is fake.

How to protect yourself from Coronavirus? Download PDF and read important information on it