Fact Check: The child in this picture with Joe Biden is not Floyd’s daughter, viral claim is fake 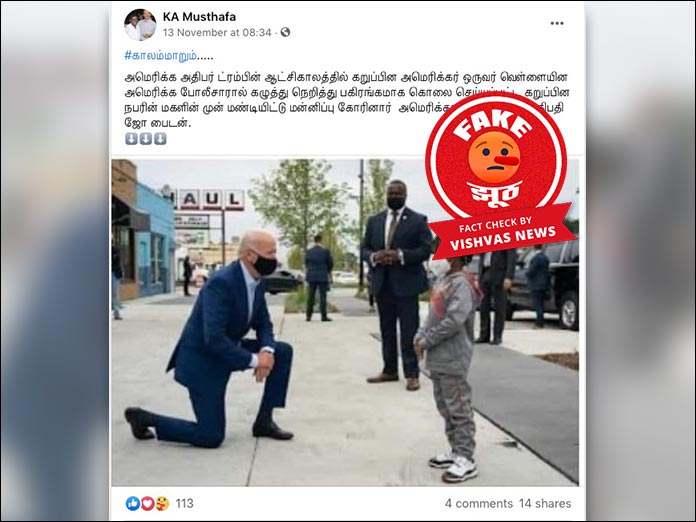 New Delhi (Vishvas News). A picture of newly elected US President Joe Biden is viral on social media with a claim that he is apologising to the daughter of George Floyd, a black man who was strangled to death by police.

Vishvas News investigation revealed the claim is fake. The photographer who took the picture clarified to us that the child in the photo is not Floyd’s daughter.

Many users have shared this image with similar claims even on Facebook.

George Floyd, a 46-year-old African-American man, died on May 25 after being handcuffed and pinned to the ground by a white police officer’s knee in Minneapolis. “The explosive footage, recorded by a bystander and shared widely on social media, led to community outrage, an FBI civil rights investigation… The Minneapolis Police Department also fired three officers,” stated an article in the New York Times.

Months after the incident, Democratic Presidential candidate Joe Biden won a landslide victory in the US presidential elections 2020. “Biden has defeated Donald Trump with 279 electoral votes, after winning in Pennsylvania. Trump still lingers on the figure of 214 electoral votes,” stated an article in the Dainik Jagran published on 8 November.

We searched on the Internet for news about the newly elected US president Joe Biden meeting George Floyd’s daughter. While we found article published on 21 August about Biden recalling Floyd’s daughter’s words, we did not find any news reports confirming the viral claim.

We searched the viral image using Google reverse image search tool to find its original source. We found this picture published by the Outlook India with description, “Democratic presidential candidate Joe Biden visits with CJ Brown, right, and Clement Brown, the son and father of the owner of Three Thirteen, as Biden arrives to shop for his grandchildren at the store in Detroit. Biden is visiting Michigan for campaign events.”

We accessed this picture in a tweet posted by Corinne Perkins, North America editor for Reuters Pictures identifying the photographer Leah Millis.

Vishvas News contacted Leah Millis, Senior photographer in Reuters, Washington to verify the claim. Sharing to us the link to the documented photograph, Millis clarified that the boy in the picture is from Detroit and is not Floyd’s daughter Gianna.

Sharing to us a video of Gianna, Millis helped us identify that the child in the viral photo is different.

Millis had also posted a tweet refuting the fake claims.

Social scanning of the Facebook user KA Musthafa who shared the viral claim revealed that he is from Ooty, Tamil Nadu and has 7,418 followers on Facebook.

Conclusion: The viral post is fake. Joe Biden is talking to an apparel shop owner’s kid in Detroit. The child in the photo is not George Floyd’s daughter Gianna.