Fact Check: CNN did not pass on Canada fire as Ukraine’s, viral claim is false

Vishvas News in its fact check found the claims about CNN passing Canada fire as that of Ukraine as fake. The edmonton coat was being worn by the firefighter in Lviv, Ukraine. 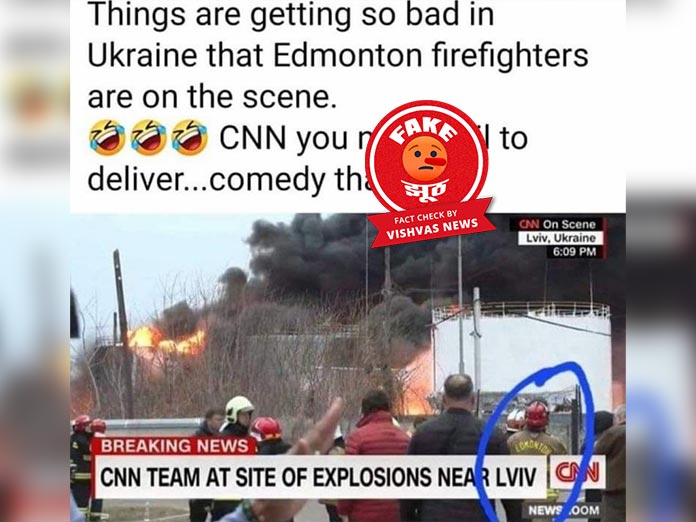 Claim:
Facebook user, Yael Steinberger posted a screenshot from CNN and wrote: The mainstream media is too busy lying they forgot to remove Edmonton Canada Firefighters. Credit to the original person who took this screenshot.
Check the post and its archive version here.

Other users too are sharing the post with similar claims.

Vishvas News started its investigation with a simple keyword search.

We used Twitter and Facebook as our search engine and searched with relevant keywords whether CNN really passed on the Canada fire as that of Ukraine.

We found a post on Facebook shared by ‘Firefighter Aid Ukraine’. The post said: Sharing this post from 2017 when we were distributing donated bunker gear in Lviv. See the “Edmonton” on the back of the jacket? There is no conspiracy. Our firefighter friends and colleagues are in harm’s way and we will continue to support them. If you or your department have any helmets, boots, bunker gear, etc to donate please reach out to us. The need is greater than ever. #ffaidukraine #ukraine #standwithukraine #fire #firefighter #ukrainefire

We also found a post on their page that shows a CNN screenshot.

We also found a news report by CBC news. The news was titled: Under-equipped Ukrainian firefighters ‘blown away’ by donated Alberta gear.

The news said: A group of Edmonton firefighters and dispatchers delivered 600 protective suits to fire fighting crews in Ukraine along with other equipment like oxygen tanks, hoses and nozzles.

We also found a fact check of CNN on the same issue titled: Fact check: Debunking the false conspiracy theory about an Edmonton firefighter coat in Ukraine

We checked the website of: EDMONTON FIRE FIGHTERS’ UNION

The website said: The Edmonton Firefighters Union is an affiliate of the International Association of Fire Fighters and represents over 1000 members consisting of uniformed dispatchers, fire fighters, inspectors, investigators, mechanics, and support personnel that serve the citizens of the City of Edmonton.

Vishvas News hence concluded that the coat which had Edmonton written on it had been donated by Firefighter Aid Ukraine which was being used while firefighters doused a fire in Ukraine.

For physical verification, we got in touch with Head of Strategic Communications at CNN, Matt Dornic, he said, “The Edmonton gear in Lviv is a result of the efforts Firefighter Aide Ukraine (FAU), a nonprofit that collects unneeded and unwanted firefighter gear, PPE, life rescue equipment, and medical supplies from fire departments and vendors in Canada for use by first responders in various locations of Ukraine in need of equipment and supplies. A 2017 photo of the organization distributing an “Edmonton” coat in Lviv can be found on the group’s Facebook page.”

Vishvas News in the last step of investigation did a background check of the user who shared the post, Yael Steinberger has ten followers on Facebook.

Conclusion: Vishvas News in its fact check found the claims about CNN passing Canada fire as that of Ukraine as fake. The edmonton coat was being worn by the firefighter in Lviv, Ukraine.