Fact Check: No, Russia did not warn India of consequences, viral CNN screenshot is edited

Vishvas News in its investigation found that Russia or Putin did not warn India of consequences, viral CNN screenshot is edited. 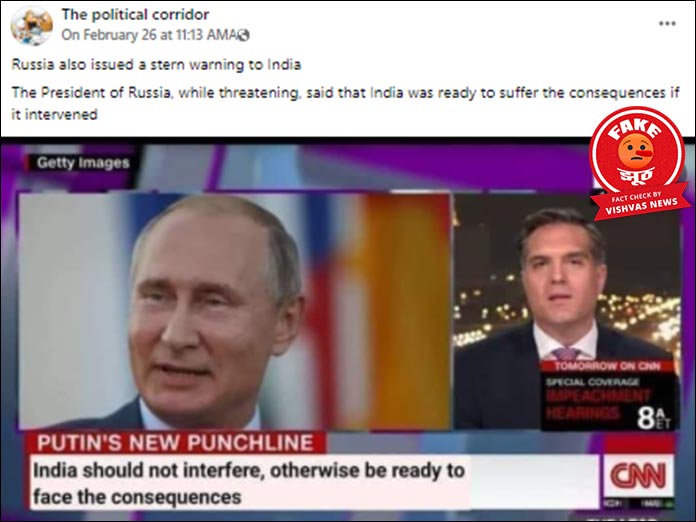 Vishvas News (New Delhi): Amidst the Ukraine-Russia war and with one Indian student losing his life in Russian shelling on Ukraine city, numerous posts are going viral with fake claims. Vishvas News came across one such post that claimed ‘Putin has asked India not to interfere, otherwise be ready to face consequences’. We found that the CNN breaking plate is edited.

Facebook user सियासी गलियारा posted a screenshot that looked like a CNN video on its Facebook profile. The screenshot said:
Putin’s new punchline, India should not interfere, otherwise be ready to face the consequences.

Check the image and its archive version here.

Vishvas News did a simple search on the image through Google Lens.

We were immediately led to the website, https://edition.cnn.com/ where we found a video, which used a similar picture of Putin.

The information shared on the website was: Russian interference in U.S. elections now comedy fodder for Kremlin
The Lead

The video had the exact same layout which was going viral after being edited.
However, the screen said: PUTIN’S NEW PUNCHLINE: TOP RUSSIAN OFFICIAL JOKES ABOUT INTERFERING IN U.S. ELECTIONS IN 2020

See the original screenshot of the video below.

We also did a keyword search but could not find any such statement by Putin against India on any authentic media website.

It was hence clear that Putin had not warned India.

In the next step of investigation, Vishvas News has reached out to head of strategic communications of CNN, Matt Dornic. He said, “Yes. It’s been edited. It’s a fake chyron in the wrong font over a screenshot from an actual broadcast. CNN never published nor broadcasted that story.”

Vishvas News did a social background check of the user who shared the viral screenshot. सियासी गलियारा @THEPOLITICALGALLERY is liked by 56,208 users while over one lakh people follow the user.

Conclusion: Vishvas News in its investigation found that Russia or Putin did not warn India of consequences, viral CNN screenshot is edited.