Fact Check: The claim of a man using a lost nuclear bomb to power his home is false

Vishvas News found in its investigation that this news is actually false. This is taken from a satirical article. 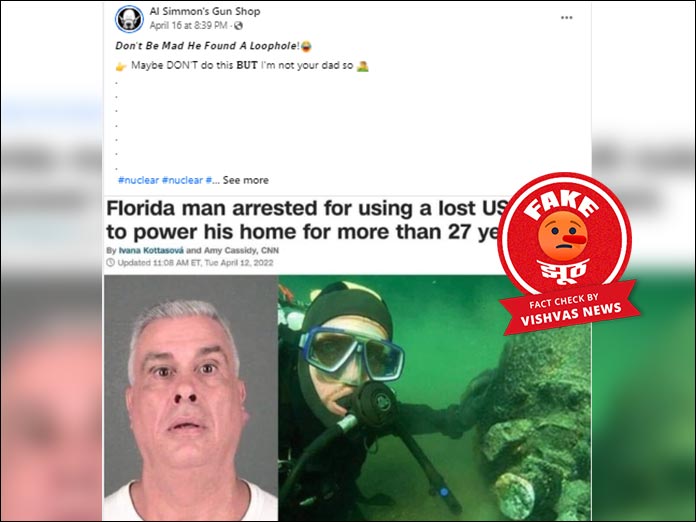 New Delhi (Vishvas Team). A post is going viral on social media in which it is said that ‘a man found a lost nuclear bomb in Florida and used it to generate electricity for his house. After this, the person was arrested’. Vishvas News found in its investigation that this news is actually false. This is taken from a satirical article.

The photo going viral looks like a news clip. The description of this photo reads “A man in Florida was arrested for using a lost nuclear bomb to power his home.”

We took the help of Google keyword search but we did not find any such news on any renowned and authentic news website. Yes, this news was there on some local websites but all of them did not give any details on this incident. Only viral social media posts were cited.

On reverse image search with keywords for the picture of the scuba diver given in the viral post, we found a news story on worldnewsdailyreport.com. According to the news “Georgia: amateur diver finds long-lost nuclear weapon.”

On searching worldnewsdailyreport.com, we came to know that this is a satirical website where articles based on satire are written. According to the disclaimer on the website “World News Daily Report assumes all responsibility for the satirical nature of its articles and for the fictional nature of their content. All characters appearing in the articles on this website – even those based on real people – are entirely fictional and any resemblance between them and any person, living, dead or undead, is purely a miracle.”

However this scuba diver’s photo was first used in a news article on dw.com which was published on 15.01.2014.

On checking the first image of the mugshot in the viral post with Google reverse image, we found this image on theguardian.com The man in the photo is Todd Warneken, who reportedly threatened to beat up and racially abuse a black woman outside a grocery store in Albany, New York, during the final weeks of the 2016 election campaign. The woman was waiting for the taxi. According to the police, he was shouting the slogan”Trump is going to win and if you don’t like it then you can go”. He also told her: “You [racial abusers] had your time. You’ve completed eight years.” Warneken, 55, was arrested and charged with harassment.

We have contacted CNN via mail regarding this. The news will be updated as soon as the response comes from there.

Conclusion: Vishvas News found in its investigation that this news is actually false. This is taken from a satirical article.