Fact Check: The man talking about the internet in the video is comedian Michael Spicer, not popstar Mick Jagger

Vishvas News found this claim to be false. The person talking about the internet in the video is not Mick Jagger. The original video is a spoof video made by comedian Michael Spicer. 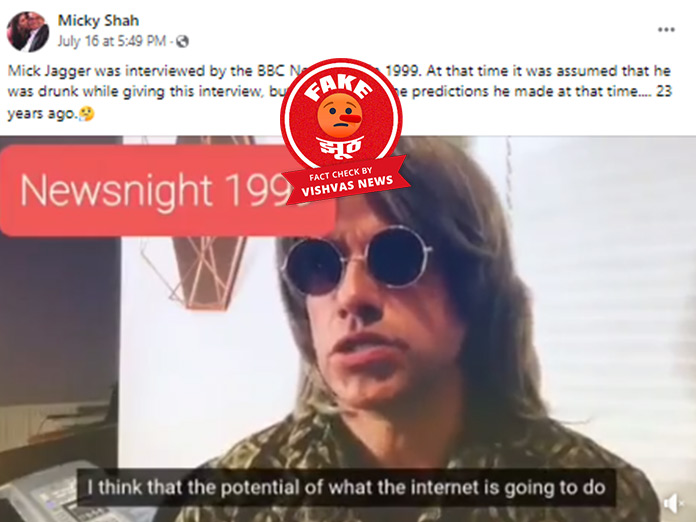 New Delhi (Vishvas News). A video is going viral on social media, in which an interview between two people can be seen. In the interview, the interviewee speaks about the internet and says “people will waste hours watching videos of cats and dogs and communicating with emoji and not words. Social media sites will be used by people on their phones to argue with strangers. Social media will also be a platform for people to share misinformation about immigration.” It is being claimed with the post that this person giving the interview is popstar Mick Jagger who gave this interview in 1999. Vishvas News investigated this post and found that the claim is false. The original video is a spoof video made by comedian Michael Spicer.

A Facebook user (archive link) named Micky Shah shared this post. The post read, “Mick Jagger was interviewed by the BBC Newsnight in 1999. At that time it was assumed that he was drunk while giving this interview, but just listened to the predictions he made at that time…. 23 years ago “

This video has also gone viral in the name of popstar David Bowie.

In the comments of the viral video, several people wrote that the man in the video is comedian Michael Spicer.

To check the claim, we did a Google reverse image search of the keyframes of the video with the keyword “Michael Spicer”. We found this video uploaded on the Twitter account of noted British comedian Michael Spicer on January 2022.

We reached out to Michael Spicer via Twitter direct message about this matter. In response, he shared his tweet and told us “Here’s my original tweet. This is just a sketch and was never meant to deceive anyone. I don’t think I look anything like Jagger or Bowie, so I don’t know. That’s how fooling someone is!”

Now we had to find out whether Mick Jagger or David Bowie ever made such a statement about the Internet. We did not find any such statement from Mick Jagger. But we did find a statement from David Bowie in which he said “I don’t think we’ve even seen the tip of the iceberg. I think the potential of what the internet is going to do to society, both good and bad, is unimaginable,” Nowhere did he say anything like this about social media, ads, and videos of dogs and cats.

This video was shared by a Facebook user named ‘Micky Shah’ with the wrong claim. 2700 people follow the user.

Conclusion: Vishvas News found this claim to be false. The person talking about the internet in the video is not Mick Jagger. The original video is a spoof video made by comedian Michael Spicer.