Fact Check: This Picture Of currency notes on the Venezuela streets is again viral with fake claim 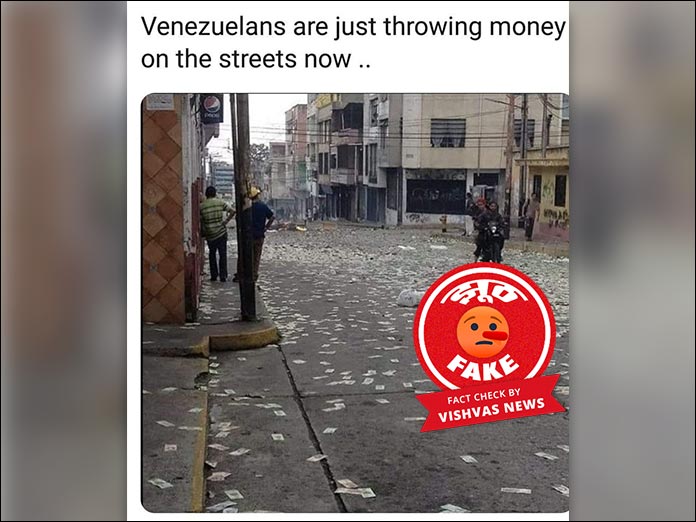 New Delhi (Vishvas News). A viral picture is shared with a claim that Venezuela people had thrown currency on the roads.

Vishvas News investigation revealed the claim is fake.  The viral picture is from an incident happened in March 2019 after robbers threw currency on the roads post demonetisation in Venezuela. Some of these pictures went viral earlier as from Italy. Vishvas News report on the viral pictures can be seen here .

We first uploaded the viral video to the InVID tool and extracted keyframes. We searched them on the Internet using Google reverse image search tool. We found the original picture on many websites and social media accounts.

The same viral picture was used in a news uploaded on Venezuela’s website maduradas.com. Apart from this, we also found many other similar pictures in the news. The news report published on 11 March 2019 stated that the Bycentenier Bank Agency in Merida was robbed and the currency notes were thrown on the streets. Those were the notes that had gone out of circulation after Venezuela’s 2018 demonetisation. You can read the whole news here.

We also found the picture in a tweet posted on 12 March 2019 by a Twitter handle named CNW ‘@ConflictsW’.  We found many pictures in the tweet with describing it as incident after robbery in a bank in Merida, Venezuela.

During the investigation we identified that the twitter handle CNW has more information about the incident. We contacted this Twitter handle for verification and could confirm that the viral picture is from Venezuela, but has earlier gone viral with fake claim as from Italy.

Social scanning of Facebook user Srirama Rao Ajjarapu who shared the viral post revealed that he is from South India is influenced by a particular ideology.

Conclusion: The viral claim is fake. The picture is from an old incident in Venezuela after robbers threw demonetised currency notes on the streets.