Fact check: Video being shared as test-launch of BrahMos missile in Myanmar, is from India

Video going viral as test-launch of missile in Myanmar is that of India. The claim is misleading. 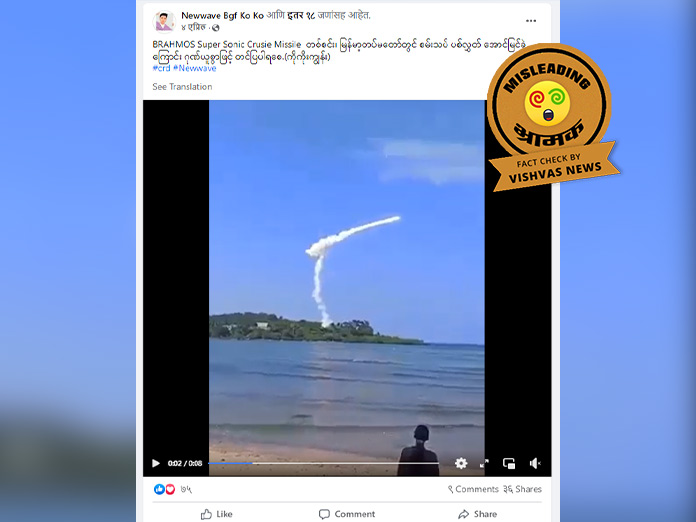 New Delhi (Vishvas News): Vishvas News came across a video and also pictures that appeared to be screengrab of the video being shared on Facebook with the claim that Myanmar successfully test-launched a BrahMos supersonic cruise missle. Vishvas News in its investigation found that the video is not from Myanmar but of the test firing of BrahMos supersonic cruise missile in Andaman and Nicobar islands jointly developed by India and Russia.

Translation: I am proud to say that the BRAHMOS Super Sonic Crucible missile has been successfully launched in the Myanmar military. (Coco Island) crd #Newwave

We also found that some users had posted pictures that looked like screengrab from the same video.

We then ran a Google Reverse Image search on all the pictures and searched for the results.

We also found the video on the Twitter handle of @livefist ‘LiveFist’ with caption: A citizen’s video of today’s BrahMos ER launch in the Andaman Islands:’

Video was also found on twitter handle of Defence Squad.

Vishvas News also found an article on the website of Frontline with the headline: India successfully tests extended-range version of BrahMos cruise missile from Andaman and Nicobar Islands.

Published on March 24, 2022 article said, “India on March 23 successfully test-fired the extended-range version of a surface-to-surface BrahMos supersonic cruise missile from a launch pad in the Andaman and Nicobar Islands. Officials connected with the launch said the “extended range BrahMos missile hit its target with pinpoint accuracy”.

NDTV too had carried a report on March 24, 2022, stating: Extended Range BrahMos Missile Test-Fired, Minister Says “Proud Moment” This link too had the viral video shared in the article.

Kiren Rijiju, Minister of Law and Justice, too had tweeted the video.

We also checked if there were reports of Myanmar test-firing a missile.

We did not find any credible reports of the same.

In the last step of investigation, Vishvas News reached out to Nitin Gokhale, a national security analyst. He informed that this video is not from Myanmar but from Andaman and Nicobar where the Indian armed forces conducted a successful test firing of the BrahMos supersonic extended range surface-to-surface cruise missile.

Vishvas News in the last step of the investigation the Facebook user Newwave has not shared much details on the profile but has shared content mostly in Burmese.

Conclusion: Video going viral as test-launch of missile in Myanmar is that of India. The claim is misleading.