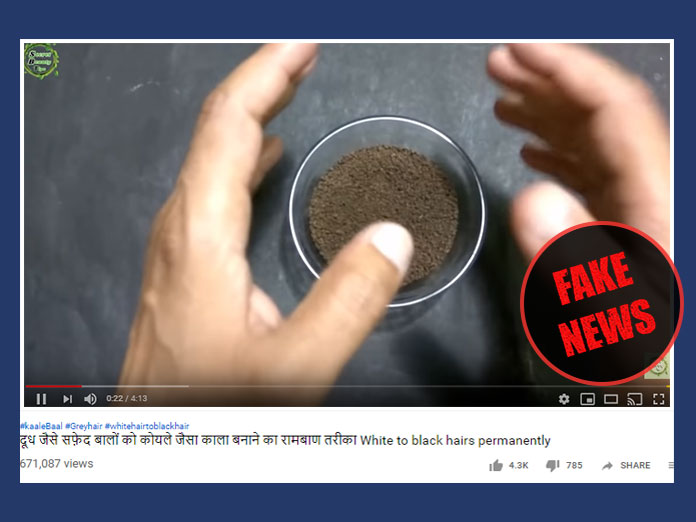 A video is getting viral across social media platforms claiming that white hair can be turned to black permanently by following a simple home remedy. As per the claim in the video, 3 spoons of tea powder and 1-2 glasses of water need to be boiled together for 5-10 minutes. Application of this mixture on hair 1 hour before taking bath can turn white hair to black permanently. Vishvas News investigated and found that the claim is misleading.

As per the claim in the viral video, white hair can be turned to black permanently by applying the mixture of tea water made of 3 spoons of tea powder and 1-2 glasses of water boiled together for 5-10 minutes.

We started our investigation by looking at the comments of the viral post. Many people commented that they have followed this remedy by applying the mixture of tea water made of 3 spoons of tea powder and 1-2 glasses of water but it wasn’t effective.

Vishvas News searched the causes of greying of hair on Google using appropriate keywords and found a report on the official website of US National Library of Medicine that stated: “Hair color change is one of the clearest signs of aging. Hair color is due to a pigment called melanin, which hair follicles produce. Follicles are structures in the skin that make and grow hair. With aging, the follicles make less melanin, and this causes gray hair. Graying often begins in the 30s.

Scalp hair often starts graying at the temples and extends to the top of the scalp. Hair color becomes lighter, eventually turning white.

Body and facial hair also turn gray, but most often, this happens later than scalp hair. Hair in the armpit, chest, and pubic area may gray less or not at all.

Graying is largely determined by your genes. Gray hair tends to occur earlier in white people and later in Asians. Nutritional supplements, vitamins, and other products will not stop or decrease the rate of graying.”

We further contacted Dr. Manas Dutt, Hair transplant surgeon, Hair transplant and cosmetic center on whether there is any such treatment that can naturally turn white hair to black permanently using black tea made of boiling tea powder and water. The doctor denied such claims stating: “No, this treatment of applying black tea on hair cannot turn white hair to black permanently. There is no scientific relation to these.”