Fact Check: Calling a sleeping person’s name can cause brain damage is a fake post 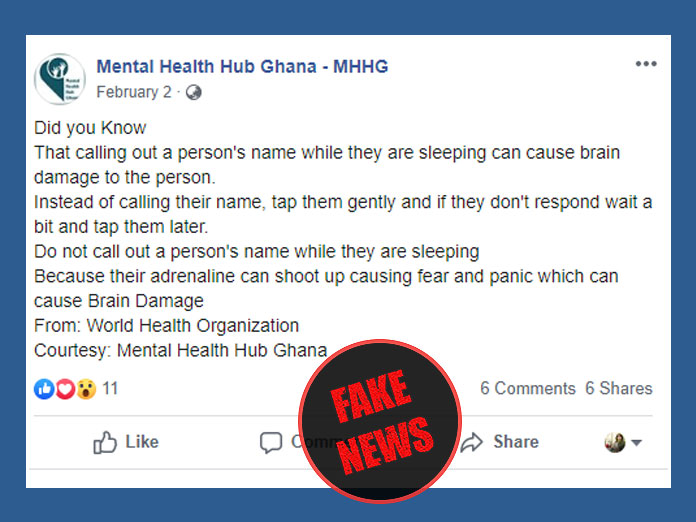 A message is circulating on social media claiming that you should not call out a person’s name while he is sleeping as it causes brain damage because adrenaline can shot up causing fear and panic which can cause brain damage. The message has been attributed to World Health Organization (WHO).

We contacted Dr. Rohin Bhatia, Neurosurgeon, Mahatma Gandhi Hospital, Jaipur. As per the doctor, this type of incident in which calling a person’s name while he is asleep can cause damage to his brain is neither reported nor there are any evidences available.

We also contacted Dr. Mukul Verma, Neurologist, Indraprastha Apollo Hospital. He also denied any possibility that calling a person’s name while he is asleep can cause any damage to his brain.

Sleeping people around the world are regularly awakened by people calling them or by loud noises that generates a degree of irritation.

A person who is suddenly awakened from a deep sleep may feel momentarily startled. But, unless the person has existing medical issues, calling him while he is asleep will not cause any serious health problems.

We searched online reports that validates the claim but did not find any.

The post is attributed to World Health Organization (WHO). We did not find any release by WHO that validates the claim in the viral message.

Calling a person’s name while he is sleeping as it causes brain damage is a fake news.