Fact Check: Cold drink and mangoes is a deadly combination, is a fake post 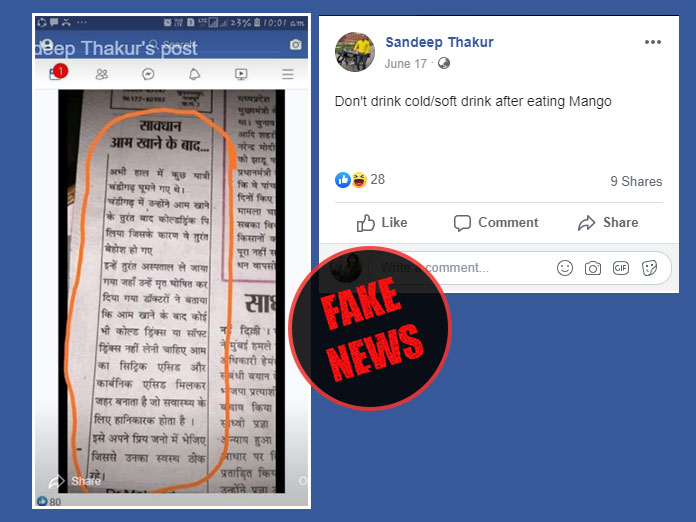 A message is circulating on social media with a claim stating that: “mangoes and cold drinks, if consumed together, create a deadly combination in the stomach. There is citric acid found in mango which mixes with carbonic acid and forms an acid which is poisonous for human beings. Also, two people died as soon as they consumed cold drink after eating mangoes.” The post has been shared by a Facebook user Sandeep Thakur.

Vishvas News team started the investigation by contacting a Nutritionist, Ms. Avni Kaul on whether drinking cold drink immediately after eating mangoes can create a deadly reaction in the stomach.

“Citric acid, or citrate, is an organic acid that exists in all fruits. The highest concentration of citric acid occurs in lemon juice with 1.44 grams per ounce of juice. Lime juice comes in second with 1.38 grams per ounce.  In comparison, citric acid is found in very minimal quantity in Mangos, less than 0.1 grams in every 100 grams of mango.

On the other hand, soft drinks contain Carbon-di-oxide gas dissolved in water under high pressure. This carbon-di-oxide combines with water to form Carbonic acid. When soft drinks bottles are opened the carbonic acid starts to decompose. This decomposition of carbonic acid produces the characteristic soda fizz. Despite its acidic properties, there’s no evidence to suggest that carbonic acid in beverages does any harm to humans.

Also carbonic acid and citric acid are both weak acid there is no proven record of both the acids mixed together, doing any damage to human body at chemical levels.”

“In a practical sense, if citric acid mixed with carbonic acid could turn poisonous and kill humans then MILLIONS Indian would have died after drinking the famous Sikanjis (Indian Lemonade), since lemon contains 10 times more citric acid, compared to mangos.”

She also explained about the rare cases when the combination of mango and soft drinks can be harmful:

“In a theoretical scenario, mango and soft drinks combination may be harmful if the person is diabetic and have a very high sugar level in body prior eating. In such a scenario, a further spike in sugar level may cause harm to organs if insulin is not given on time.”

Vishvas News searched for any scientific study confirming that mixing the mango and cold drinks can cause any severe chemical reaction. But, there was no study available.

We then searched news reports stating that two men died after consuming mangoes and cold drinks. No, news reports were available.

Post claiming having cold drinking after eating mangoes can create a deadly combination is fake.

Knowing the truth is your right. If you have a doubt on any news that could impact you, society or the nation, let us know. You can share your doubts and send you news for fact verification on our mail ID contact@vishvasnews.com or WhatsApp us on 9205270923