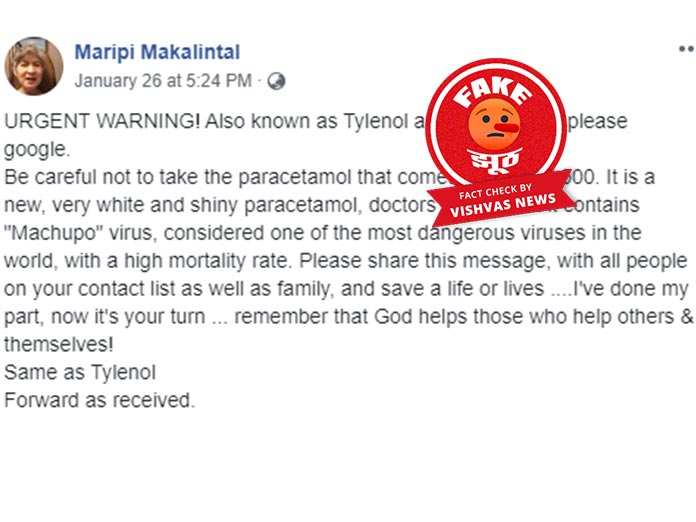 A viral message on Facebook warning people not to consume Paracetamol with P-500 written on them as it contains Machupo virus has resurfaced. Earlier, the post went viral in the month of July 2019. The viral message claims that Paracetamol P-500 tablet contains ‘Machupo’, a deadly virus.

The post shared on Facebook by a user named Maripi Makalintal reads:
URGENT WARNING! Also known as Tylenol and other names please google.
Be careful not to take the paracetamol that comes written P / 500. It is a new, very white and shiny paracetamol, doctors advise that it contains “Machupo” virus, considered one of the most dangerous viruses in the world, with a high mortality rate. Please share this message, with all people on your contact list as well as family, and save a life or lives ….I’ve done my part, now it’s your turn … remember that God helps those who help others & themselves!
Same as Tylenol Forward as received. The archived version of the post can be checked here.

A similar post had been rechecked by Vishvas News earlier. The post has resurfaced now and is widely shared across social media.

The post starts with the statement that Paracetamol is also known as Tylenol. When we searched we found that Paracetamol is available as a generic medication with trade names including Tylenol and Panadol, among others. The post further states that people should not consume Paracetamol with P-500 written on it as it contains machupo virus.