AirPods emit low-level radiation but experts suggest that there is no evidence that using them causes brain tumours. 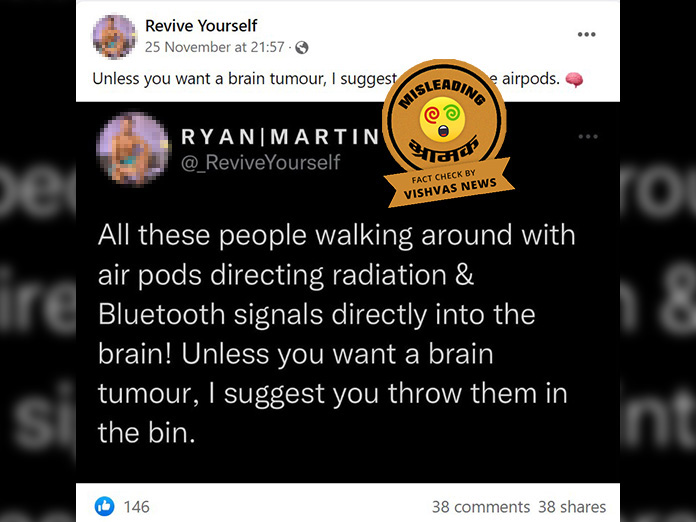 “AirPods direct radiation and Bluetooth signals directly to the brain“, it has claimed, warning people to ditch their AirPods “unless you want brain tumour.”

The text is circulating in multiple identical posts. One such post reads “AirPods produce dangerous amounts of electromagnetic waves.” To bolster the claim, many social media posts cite a 2019 article with the headline that reads, “More than 250 scientists warn EMF from wireless devices such as Apple’s AirPods poses cancer risk.”

Vishvas News investigated the claim and found that the viral post is misleading. We found no evidence that scientists have declared AirPods a health hazard. Also, AirPods emit levels of radiation far below the established limits, and less than cellphones.

A post widely shared on social media claims “AirPods direct radiation and Bluetooth signals directly to the brain”, and warns people: “Unless you want a brain tumour, I suggest you ditch the AirPods.”

According to a report on Meedan’s Health desk, exposure to magnetic, electric, and electromagnetic fields (EMF) can come from natural as well as human-made sources.

AirPods emit low-level radiation (known as non-ionising radiation) in the form of electromagnetic radiation called radiofrequency (RF) energy. This kind of radiation is also emitted by mobile phones and other wireless devices.

In 2015, an international appeal was signed by over 200 scientists to the World Health Organization (WHO) calling for “strong leadership in fostering the development of more protective EMF guidelines, encouraging precautionary measures, and educating the public about health risks.”

Interlinking the link to this petition, multiple claims have been circulating on social media claiming that this appeal by scientists is a warning against radiation from wireless headphones including Apple AirPods.

Upon investigation, it was found that the letter was originally sent in 2015. Neither letter mentions AirPods, which were introduced in 2016.

According to the National Cancer Institute, electromagnetic fields, or EMFs, are a combination of electric and magnetic fields of energy, or radiation, produced by electricity.

National Institute of Environmental Health Services does however say that prolonged exposure to ionising EMFs could harm humans. Though, low-level EMFs are thought to be harmless, it adds.

According to the FCC, the maximum amount of radiofrequency waves that a person would absorb from AirPods is well below the limit set by it and the devices don’t emit radiation while turned off.

Vishvas News contacted a host of scientific experts, to elicit their views on the viral claim.

Vishvas News contacted Professor Rodney Croft, Chair, International Commission on Non-Ionising Radiation Protection (ICNIRP) and Director, Australian Centre for Electromagnetic Bioeffects Research (ACEBR) for his views on the claim. Prof Croft said in an email response: “The claim that “AirPods are directing radiation and Bluetooth signals directly into the brain, and you shouldn’t wear them if you don’t want a brain tumour” is false. There are two important misleading aspects to this claim: 1/ The radiofrequency radiation that comes from the AirPods’ Bluetooth (and which is similar to that from mobile phones, TV and radio broadcast antennas, baby monitors, etc), cannot cause cancer (brain tumours). This error appears to be due to a confusion between ‘radioactive’ and ‘non-radioactive’ radiation, in that it is only ‘radioactive’ radiation that can cause cancer, whereas radiofrequency radiation is not radioactive (regardless of how strong the exposure is). That is, the radiation from the AirPods’ Bluetooth is not radioactive, and does not cause cancer. 2/ To cause other types of harm (generally due to heating), radiofrequency radiation needs to be at a level that is far higher than the safety limits set by the International Commission on Non-Ionising Radiation Protection (ICNIRP), whereas the levels emitted by AirPods are many times lower than the ICNIRP limits. The radiation from AirPods are therefore not capable of causing any harm.”

Vishvas News also sought the views of a neurologist, on the claim linking emissions from earphones with brain tumours. Commenting on the viral claim, Dr. Abhishek Juneja, Senior Consultant Neurologist, Maharaja Agrasen Hospital, Dr. Juneja’s Neuro Centre, New Delhi said: “Based on the research till date, AirPods have not shown to be emitting any harmful radiation causing brain dysfunction or tumour.”

We also contacted Dr. S. Murali, Secretary, IARP, Radiation Safety System Division, Bhabha Atomic Research Centre, Mumbai, Maharashtra. He said: “In my opinion, the usage of technical gadgets should not be construed to be harmful – resulting in complications.“

Conclusion: AirPods emit low-level radiation but experts suggest that there is no evidence that using them causes brain tumours.