Fact Check: No, Miracle Mineral Solution cannot cure diseases such as autism or depression, this is a fake news﻿ 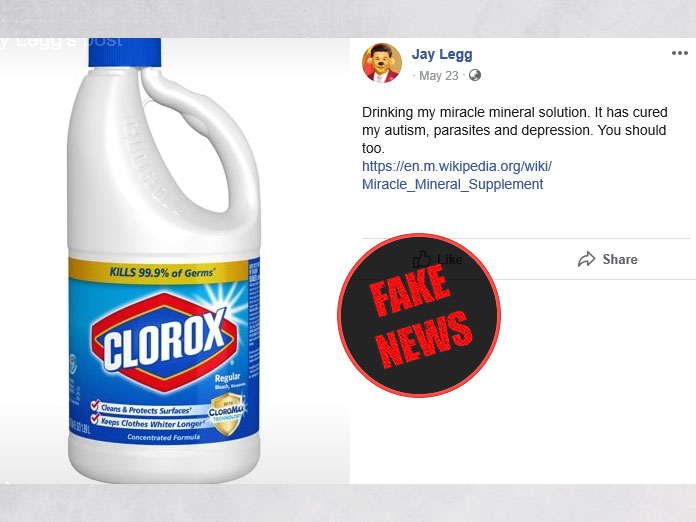 A post is doing rounds on Facebook claiming that a Miracle Mineral Solution can cure diseases such as autism, parasites and depression. Vishvas News investigated and found that the viral post is fake.

It further read that: “MMS is falsely promoted as a cure for HIV, malaria, hepatitis viruses, the H1N1 flu virus, common colds, autism, acne, cancer, and much more.”

This means that the Wikipedia page Miracle Mineral Supplement itself says that it is falsely promoted to cure various diseases.

FDA warms people not to fall prey on the posts asking to consume miracle mineral supplements as it can cause various health problems. The article states: “If you’re drinking “Miracle” or “Master” Mineral Solution or other sodium chlorite products, stop now. The U.S. Food and Drug Administration (FDA) has received many reports that these products, sold online as “treatments,” have made consumers sick.”

Many other websites also published that miracle mineral supplement will not cure diseases. For example, a website named Vice published an article the screenshot of which is given below:

The image shown in the Facebook post is that of Clorox, which is a bleach. It is used as a disinfectant for cleaning purposes.

Vishvas News contacted Dr B.S. Arora who is a physiatrist. He said: “The claim stating that drinking miracle mineral solution can cure autism, parasites and depression is completely fake. In fact, this can cause serious problems if consumed.”

The post claiming that a miracle mineral solution can cure diseases is fake.