Fact Check: No, MR Vaccine does not cause infertility, the viral post is fake 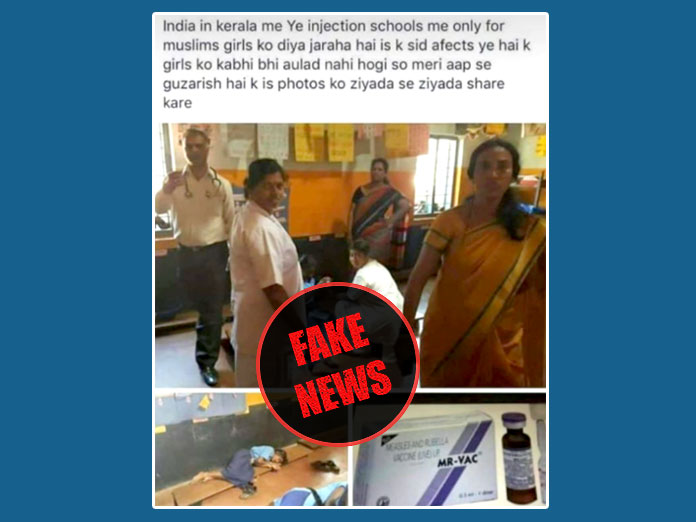 A post is getting viral on social media claiming that schools in Kerala are forcibly injecting Muslim girls with a vaccine that can make them infertile as its side effect. One of the photos shows a vaccine MR-VAC, which is a common Measles-Rubella Vaccine.

A post is doing rounds claiming that in a school in Kerala, a vaccine is being forcibly injected in Muslim women. As per the claim, the vaccine causes infertility in women. The photo of the vaccine was also shared. Vishvas News investigated and found that the viral claim is false.

The description of the medicine stated that MR vaccine is recommended in infants, children, adolescents, and adults and it is highly safe and well-tolerated. There isn’t any safety concern related to the use of medicine.

Vishvas News further investigated and found that medicine is also listed on the official website of the World Health Organization (WHO).

Vishvas News spoke to Dr. Praful Bharadwaj of UNICEF. He said: “MR-VAC is a Measles-Rubella vaccine. It is a licensed vaccine. It is also among the WHO prequalified vaccines. It is manufactured by Serum Institute of India. The viral post is fake.”

India’s Ministry of Health and Family Welfare released its national guidelines for measles-rubella vaccination and immunization in 2017. As per the release, the vaccine will be introduced as Measles-Rubella campaign, targeting children from 9 months to below 15 years, in a phased manner over a period of two to three years. This will be followed by the provision of MR vaccine in routine immunization, replacing the currently given measles vaccine, at 9-12 months and 16-24 months of age. This wide age range campaign, as recommended by NTAGI, will rapidly build up immunity for both measles and rubella and reduce measles and rubella transmission in the community.

MR-VAC (Measles-Rubella Vaccine) is highly safe and well-tolerated as per doctors. This vaccine does not cause infertility as claimed in the viral post.