Fact Check: Old Pictures of a flooded hospital in Bihar shared as recent with a COVID-19 spin

The picture of a hospital flooded rain water going viral as recent claiming it to be from Patna, is actually a 2018 photo of Nalanda Medical College Hospital. 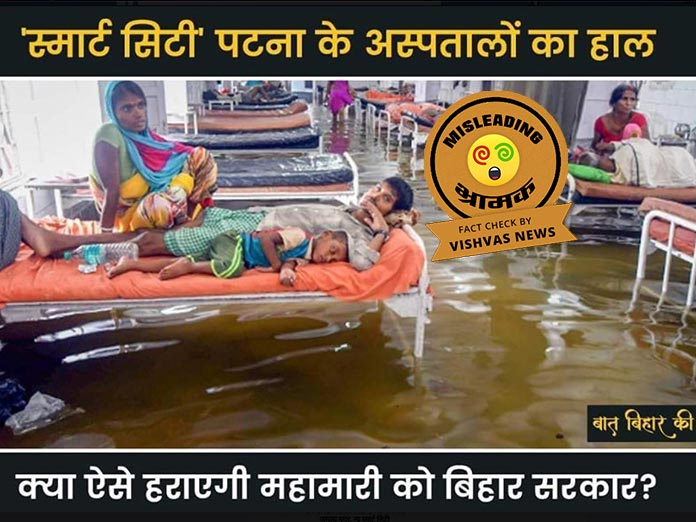 New Delhi (Vishvas News): Many states of India witnessed heavy rains recently. In this context, a picture is going viral on social media in which the hospital ward can be seen flooded with rain water. The picture is shared recently on social media claiming it to be from a hospital in Patna.

When Vishvas News investigated we found the claim to be misleading. The picture of a hospital flooded with rain water that went viral as a recent incident in Patna is actually the photo of Nalanda Medical College Hospital from 2018.

As per the report, due to heavy rains in Patna, water entered the ICU of Nalanda Medical College Hospital (NMCH) and other wards. The reports also stated that fishes were also seen swimming in the rain water in the ICU.

This was confirmed by the tweet of the news agency ANI. According to the tweet made on July 29, 2018 fishes were seen swimming in rain water in the ICCH of NMCH.

Vishvas News spoke to the health reporter Pawan Mishra of Dainik Jagran and he shared that the picture is not recent. During the monsoon, heavy rains often result in water logging in the city and water enters hospitals.

Conclusion: The picture of a hospital flooded rain water going viral as recent claiming it to be from Patna, is actually a 2018 photo of Nalanda Medical College Hospital.