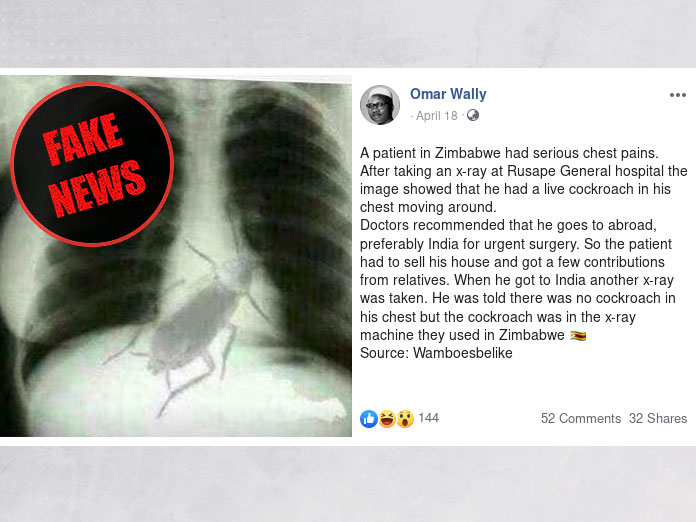 A post is circulating across social media showing a cockroach in a chest x-ray with a claim that the discovery was made at the Rusape General hospital in Zimbabwe. It further narrates that when the patient came to India for treatment it was discovered that the cockroach was in the x-ray machine. Vishvas News investigated and found that both the photo and the claim is fake.

A photo showing a cockroach in a chest x-ray is doing rounds on social media with a claim that the incident happened at the Rusape General hospital in Zimbabwe. The patient came to India for treatment it was discovered that the cockroach was in the x-ray machine.

Vishvas News started its investigation by performing reverse image search of the viral photo showing cockroach in the x-ray. We found that the photo is circulating online since 2012 with different narratives. In our investigation, we found that the original image is that of the x-ray of the yesteryear Hollywood actress Marilyn Monroe’s chest. In 1954, she was admitted to Cedars of Lebanon Hospital for surgery for endometriosis, a gynaecological condition where the x-ray was taken. In 2010, a set of three X-ray images were auctioned for $45,000 by the hospital. Many media companies reported the same.

The photo went viral with a false story narrative.

Vishvas News spoke to Dr Sajeev Kumar, who is a general physician. He said: “This is a fake photo doing rounds on social media since many years. Nothing such incident happened. ”

Morphed image of a chest x-ray of yesteryears actress Marilyn Monroe going viral since many years with a false narrative.