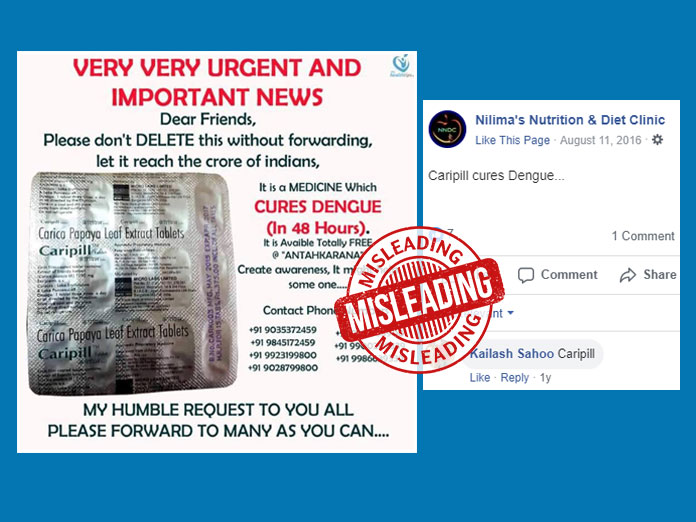 A post is doing rounds on social media claiming that a medicine named Caripill cures dengue in 48 hours. Some contact numbers were also present along with the post. Vishvas News investigated and found that the viral post is misleading.

A post is getting viral on social media claiming that the medicine named Caripill cures dengue in 48 hours. Some contact numbers were also present along with the post. Vishvas News investigated and found that the viral post is misleading.

Vishvas News started the investigation by calling up numbers mentioned on the viral post. Someone named Raju Khanapeth answered the call and said that the message circulating on social media is fake.

We searched about the medicine online using Google search. We landed to a website named Caripillmicro. We further searched and found the description of the medicine named Caripill. On the description, it was mentioned that the medicine was manufactured by a company-named Micro Labs. We contacted Micro Labs Ltd. and contact person named Nagaraj stated: The medicine is made for the treatment of dengue but you need to consult the doctor for the line of treatment. We can’t say that it can be cured within 48 hours.”

We further searched about the treatment of dengue and found a report by the National Health Portal of India, the official government website for public health information. The official website stated that there is no specific treatment for dengue, medicinal plants such as Guduchi, Tulasi, dried ginger and papaya prevents complications and helps to control the disease faster.

We further contacted Dr. Virendra Mittal of Metro Mas Hospital, Jaipur. He stated: “This medicine might help a little but it is not possible that dengue can be cured by this medicine within 48 hours.”

We also contacted Dr. Sajeev Kumar, who is a General Physician. He stated: Studies have shown that this medicine increases platelets count. But this cannot cure be a magical cure and treat dengue in a matter of hours.”

Post claiming that Caripill cures dengue in 48 hours is misleading.