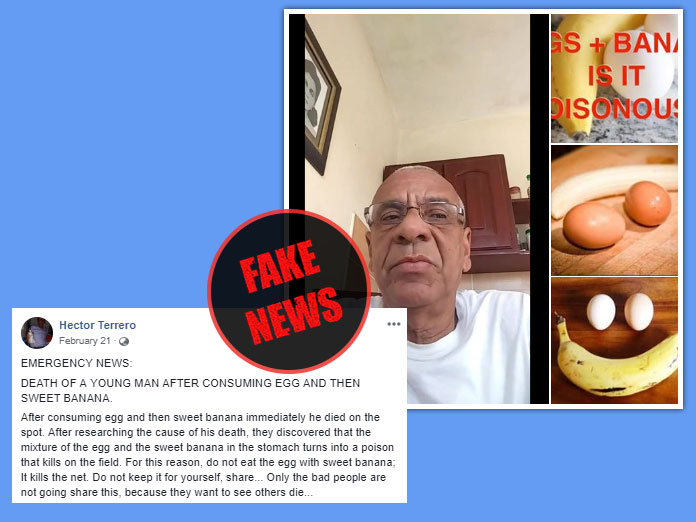 A post shared on Facebook claims that a young boy died immediately after consuming egg and sweet banana. The post further states that researchers discovered the cause of death is the poison that was formed in the stomach by the combination of egg and banana.

The Facebook post shared by the user ‘Hector Terrero’ claims that a boy died by consuming egg and sweet banana. The combination of the two formed poison in the stomach. The post reads: EMERGENCY NEWS: DEATH OF A YOUNG MAN AFTER CONSUMING EGG AND THEN SWEET BANANA. After consuming egg and then sweet banana immediately he died on the spot. After researching the cause of his death, they discovered that the mixture of the egg and the sweet banana in the stomach turns into a poison that kills on the field. For this reason, do not eat the egg with sweet banana; It kills the net. Do not keep it for yourself, share… Only the bad people are not going share this, because they want to see others die…” The user has also uploaded a video in which a man reads the entire post claiming that the boy died after eating egg and banana.

We found various posts littered all over internet warning people not to eat bananas and eggs together as it makes a deadly combination.

While searching online, we saw a dish by a large coffee chain Starbucks on its official website. The dish named Banana Nut Bread contains the combination of egg and banana apart from other ingredients.

We found during our investigation that a large coffee chain- Starbucks promotes its banana bread which is made with eggs and bananas.

We contacted Starbucks on the same and they said: “Whatever products are made by Starbucks are verified as per international standards. We have not received any complaint on the product or any health issues after the consumption of this product.“

One of the largest restaurant chains Denny’s also serves a dish named Salted Caramel & Banana Cream Pancake Breakfast that contains the combination of bananas and eggs.

We also searched online reports whether there are any casualties reported due to the consumption of this combination of eggs and bananas. We did not find any such report.

We searched news or reports that a young man died on spot after consuming eggs and bananas but there was no evidence available as claimed in the viral post.

We searched any scientific researches on the banana and egg combinations that could lead to death but did not find any mechanism by which a person’s death could be triggered by the consumption of eggs and bananas.

Vishvas News spoke to Avni Kaul, Nutritionist and Wellness Coach to clear up doubts regarding claims on the combination of bananas and eggs. She quoted:

“Such an incident cannot happen on normal circumstances because both egg and banana are two naturally blessed foods that are covered and protected from contamination with natural means. People have to peel boiled egg and banana cover to eat and till its unpeeled, it does not get contaminated. Also, it is very easy to identify a rotten banana and egg as compare to other food.

Other than that banana and egg are two wonderful sources of high-quality protein and carbohydrate. One serving of banana contains 110 calories, 30 grams of carbohydrate and 1 gram of protein. Also, bananas are naturally free of fat, cholesterol, and sodium and it provides a variety of vitamins and minerals like Vitamin B6. Similarly, one Hard-boiled egg provides only 77 calories, 5 grams of fat and a very small amount of carbs. They’re also a very good source of lean protein, at about 6 grams per egg. Furthermore, eggs pack a complete range of amino acids, which means they are a complete protein source.

Odd and rare cases where banana and egg can have its impacts on health:-

The post claiming that a boy died after eating banana and egg together is fake. We investigated and found that the claim is false and the combination of banana and eggs is not poisonous.