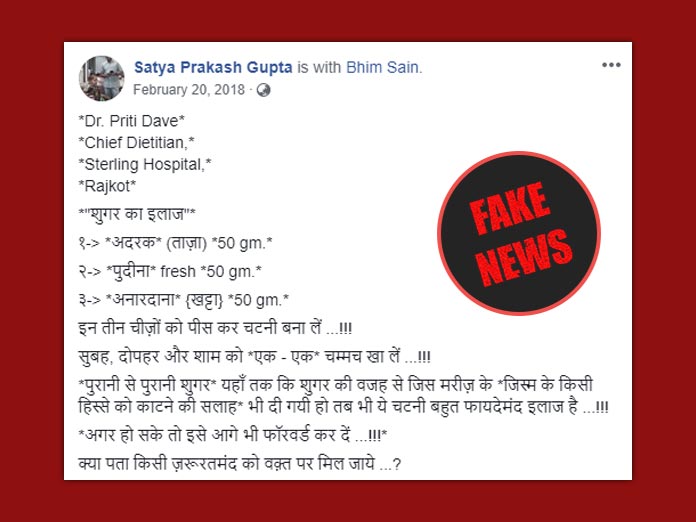 A Facebook post is getting viral claiming that diabetes can be cured by having a chutney made of certain proportions of ginger, mint leaves, and pomegranate seeds. The viral post is attributed to Dr. Priti Dave who is a Chief Dietician at Sterling Hospital, Rajkot, as claimed in the viral post. Vishvas News team investigated and found that the viral post is fake.

The viral post on Facebook claims that diabetes can be cured by having a spoonful of chutney made of fresh ginger (50 gm), fresh mint leaves (50 gm) and pomegranate seeds (50 gm) twice a day. Dr. Priti Dave of Sterling hospital, Rajkot has suggested this remedy for curing diabetes, as per the claim.

We searched whether there is any hospital named Sterling hospital in Rajkot.

On the official website of National Health Portal, Ministry of Health and Family Welfare, Government of India, we searched Sterling hospital, Rajkot from the list of hospitals.

We found a hospital named Sterling hospital, Rajkot in the list.

We further searched the hospital on Google maps and found the exact location and coordinates of Sterling Hospital, Rajkot.

From the official website of Sterling Hospitals, we found a list of doctors serving in the hospital. The name of Dr. Priti Dave was not on the list.

This means, there is no doctor named Dr. Priti Dave in Sterling Hospital, Rajkot.

As per the Center for Disease Control and Prevention, there isn’t a cure yet for diabetes, but losing weight, eating healthy food, and being active can really help. Taking medicine as needed, getting diabetes self-management education and support, and keeping health care appointments can also reduce the impact of diabetes on your life.

We searched online for any source that mentions that whether diabetes can be cured completely by having a chutney made of certain proportions of ginger, mint leaves, and pomegranate seeds. There is no reliable source.