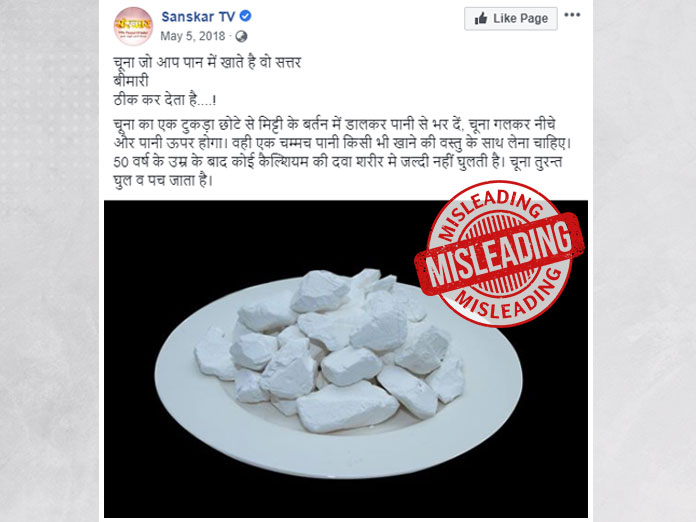 A post is viral on social media claiming that slaked lime can cure over 70 diseases. The post further claims that if one spoon of lime water is taken, it is a good source of calcium. Vishvas News investigated and found that the viral post is misleading.

A post is doing rounds on Facebook claiming that lime can cure over 70 diseases. If lime is mixed in water and one spoon of it is taken with food, it can be a good source of calcium. The post is widely shared on social media.

Vishvas News started its investigation by visiting the official website of Central Council of Research in Ayurveda Sciences (CCRAS). On searching for the properties of lime on the website of CCRAS, we found a report on the preparation of Tambulasevana (chewing of betel) and its benefits. Slaked lime was used as one of the ingredients used in the preparation. The proportion of slaked lime that was used in the preparation of Tambula was nowhere mentioned. It was suggested in the report that slaked lime do have certain health properties, but nowhere has it been mentioned that 70 diseases can be cured using slaked lime or lime water can be taken directly as a calcium source.

In the preparation of Tambulasevana as well, certain contradictions have been mentioned that should be kept in mind.

Vishvas News spoke to Dr. Pushpendra, Ayurvedic doctor, Jiva Ayurveda. He said: “There are certain purification processes of slaked lime that are followed before its consumption. We do not advise the patients to take slaked lime as a calcium supplement. It is not advisable to take slaked lime mixed in water as mentioned in the viral post. It can prove to be harmful.“

According to Dr. Bhupinder Singh, Ayurvedic doctor, Ayurvedic Clinic, Delhi, “Slaked lime has certain health benefits but it cannot be taken like the way it has been mentioned in the viral post. It needs to be purified. We do not recommend taking slaked lime directly. Slaked lime can cure 70 diseases, is not proven.”

As per Dr. Smitha Nambiar, General Physician, “Slaked lime is not a magic pill for all health issues. In fact, indiscriminate use can cause more problems than cure.”

Post claiming slaked lime can cure 70 diseases is misleading. There are certain ways in which slaked lime is purified. Ayurveda doctors do not advise patients to take it directly.