Fact Check: The post claiming that a woman delivered 17 babies at once is fake

The post claiming that a woman delivered 17 babies once is fake. 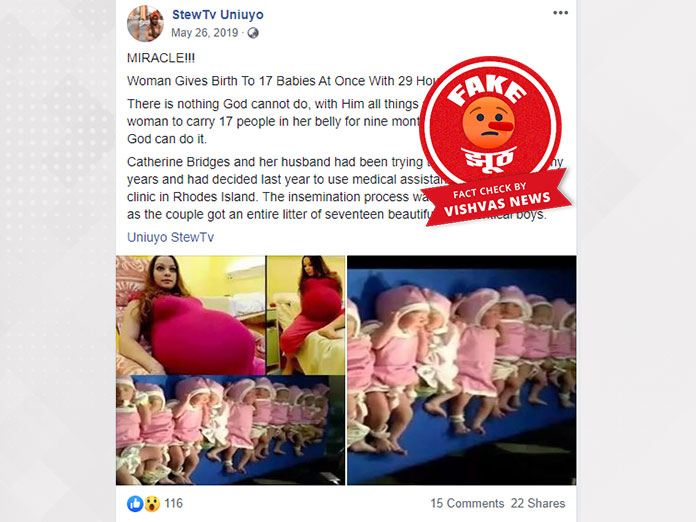 A post shared on social media claims that a woman gave birth to 17 babies at once with 29 hours operation. The viral post shows the photo of a woman along with 17 babies. As per the viral post, the name of the woman was Catherine Bridges and she used medical assistance from a fertility clinic in Rhode Island.

A viral post on social media shows the pictures of a woman and some babies. The claim with the photos states that the woman gave birth to 17 babies at once with 29 hours of operations.  The archived version of the post can be seen here.

When we carefully observed the photo of babies we found that there were 11 babies shown in the photo instead of 17.

We found a report on the website World News Daily Report which reported that a woman has delivered 17 babies in 29 hours. It also mentioned the name of the woman as Catherine Bridges which is the same as in the viral post.

But, when we investigated, we found that the website is satirical. In the tagline of the website, it was mentioned: “Where facts don’t matter“.

On the website of Guinness World Records, we found the report on most children delivered at a single birth to survive.

A woman named Nadya Suleman of United States delivered 8 babies at once on January 24, 2009.

Nadya Suleman (USA) made headlines on January 26, 2009, when she gave birth to 6 boys and 2 girls at the Kaiser Permanente Medical Center, Bellflower, California, USA. The babies were conceived with the aid of IVF treatment.

Vishvas News spoke to Dr. Anita Gupta, Gynaecologist at Fortis La Femme. “I have never faced any such case so far. A record of delivering 8 babies has been made but not 17 babies. This seems a fake news.”

Vishvas News debunked a similar claim that a woman delivered 17 babies at once.

Conclusion: The post claiming that a woman delivered 17 babies once is fake.