Fact Check: These are not photos of a man with an artificial heart 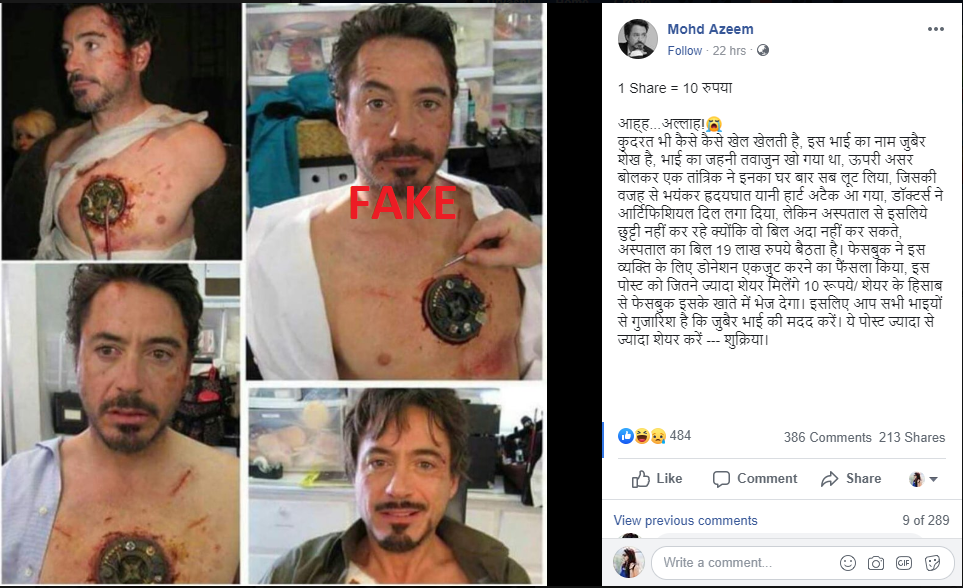 A Facebook post with a photo collage is going viral which purports to show a man with an artificial heart. The caption of the photo states that the man shown in the photo suffered from a heart attack and doctors placed an artificial heart. The caption further states that the man isn’t released from the hospital because he has no money to pay the bills and that Facebook has decided to help him by contributing Rs 10 per share. Vishvas news team investigated and found that the post is fake. In fact, the photos shown in the viral post are that of an American actor Robert Downey Jr. who is wearing prosthetic makeup behind the scenes of the 2008 superhero film, Iron Man.

A viral post on Facebook shows a photo collage which purports to show a man with an artificial heart. The viral photo is accompanied by a caption stating that the man’s name is Jubair Shaikh. An occultist robbed his house due to which he got a heart attack and doctors placed an artificial heart. The hospital bill costs Rs 19 lakhs which he cannot afford. Facebook has decided to help the man by transferring Rs 10 per share. The viral post has been shared by a Facebook user Mohd Azeem. The post has 484 reactions, 386 comments, and 213 shares.

We performed a reverse image search on Yandex and found 2 Instagram posts shared by a page of Los Angeles-based makeup artist Jamie Kelman. Here are the screenshots from the Instagram post:

The photo was shared on February 22, 2018. The caption on the Instagram post says, in part: “IRON MAN (2008) – Marvel Studios is celebrating its 10th anniversary – happy 10 years of massive success, Marvel! I was the Key Makeup Artist on their very first and imo still best Marvel Entertainment MCU movie, but I know I’m biased”.

The second photo was shared on March 12, 2018. The caption with the photo states that “This prosthetic makeup was built by Stan Winston Studio, supervised by Shane Mahan, and applied by 3 of us— my boss, makeup department head Deborah La Mia Denaver, and by Richie Alonzo, and by me.” It adds: “These pix are from the VERY first day of filming the first IRON MAN, they are dated March 12, 2007.”

We further investigated and searched the official website of the Los Angeles-based makeup artist Jamie Kelman. We landed to the same image:

We checked the profile of the Facebook user ‘Mohd Azeem’ who shared the post using StalkScan and saw many misleading posts shared by the user earlier as well.

A Facebook post with a photo collage purporting to show a man with an artificial heart is fake. In fact, the photos shown in the viral post are that of an American actor Robert Downey Jr. who is wearing prosthetic makeup behind the scenes of the 2008 superhero film, Iron Man.