Fact Check: This homeopathy medicine can cure dengue within 48 hours is a misleading claim 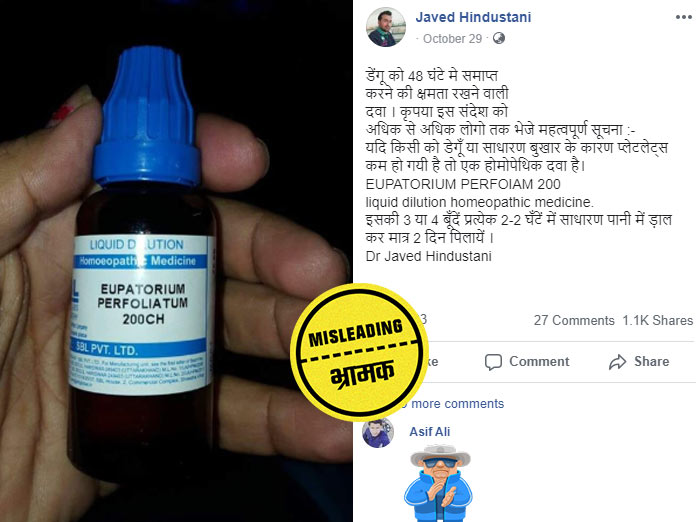 A Facebook post shared by a user named Javed Hindustani claims: A medicine named EUPATORIUM PERFORIAM 200 if diluted and consumed for 2 days, it can cure dengue. Dengue can be cured in 48 hours.

Vishvas News started its investigation by searching the viral claim on the internet. Upon searching it was found that this post is being circulated across social media by different users. The screenshot of the post shared on Facebook has been taken from the Awesome Screenshot Tool.

We further investigated by contacting a homeopathic doctor, Dr. Pankaj Grover, from Homoeopathic Care & Research Centre based out of Kalkaji, Delhi. He explained: “This claim is not true. The treatment of the disease depends on its severity. In such a small time, one can determine the nature of the dengue disease and its activity, but it cannot be said that it can cure the disease completely in 48 hours. The name of the medicine is mis-spelt on the viral post, it is actually Eupatorium Perfoliatum.”

Dr. Pankaj Grover confirms that the medicine named Eupatorium Perfoliatum 200 Ch do exist in homeopathy. But, he adds that in homeopathic treatment of dengue, different complications require different medicines.

The post claiming that the medicine named EUPATORIUM PERFOIAM 200 can cure dengue in 48 hours is misleading.