The video showing three-eyed baby shown in the clip is born in Germany is fake. 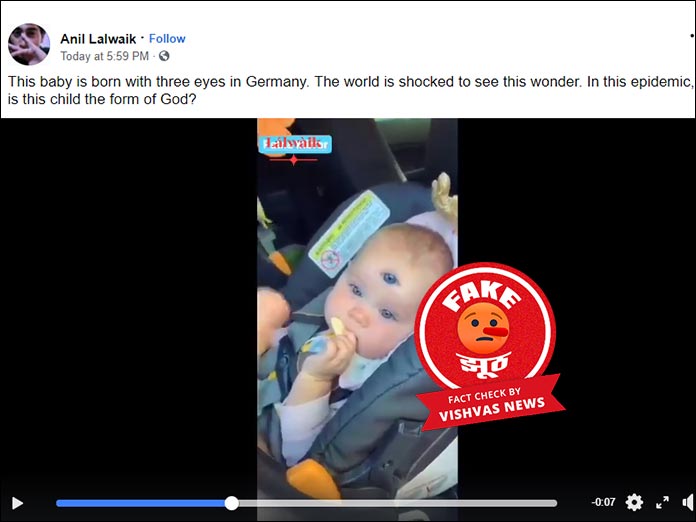 New Delhi (Vishvas News): A video clip of a baby is going viral on social media which shows a third eye in the forehead of the baby. The post claimed that the three-eyed baby is born in Germany. When Vishvas News investigated we found that the viral clip is fake and is digitally manipulated.

A clip viral on social media shows an infant with a third ey in his forehead. The caption in the video read: This baby is born with three eyes in Germany. The world is shocked to see this wonder. In this epidemic, is this child the form of God? The archived version of the social media post can be checked here.

On observing the video closely, we could see that the third eye on the forehead on the infant has been digitally edited. As can be seen, its left eye has been superimposed on the forehead in the video. Below are some comparisons of the movement of edited eye and the left eye of the infant.

We used the InVID tool and performed Google Reverse Image Search of the screengrabs, We found that the same video was uploaded on Twitter on July 9, 2020. The caption in the video was written in the Chinese language that translates in English to: The three-eyed man appeared. Here is the tweet:

The video appears on Youtube in the Chinese language.

We further searched about the video on Google using appropriate keywords. We found a Youtube video showing the same clip with a description that read: Craniofacial duplication known as diprosopus is a rare congenital disorder whereby parts or all of the face are duplicated on the head. This is a case of a 1-year-old boy referred to our hospital with an extra eye (third eye) on the left side of the head and an abnormally shaped head, which were noticed since birth.Jan 2, 2018.

When we further searched we found that the description in the Youtube video was picked up from a 2018 report which stated that a three-eyed infant was born in Nigeria. However, the photo of the three-eyed baby born in Nigeria was different from the one shown in the viral clip. You can check the complete report and the photos here.

Vishvas News spoke to Dr. Anita Gupta who is a Gynaecologist at Fortis La Femme hospital. Upon seeing the video she said: This doesn’t seem to be true. There was a case reported in Nigeria but this video isn’t that case.

We also spoke to Garima Pradhan who is a Video Editor in Jagran New Media. Upon seeing the video she said that this is an edited video and is created by using video editing tools.

The post is shared on Facebook by a user named Anil Lalwaik. When we checked the profile of the user we found that the user has 5112 followers.

Conclusion: The video showing three-eyed baby shown in the clip is born in Germany is fake.