Fact Check: Video claiming eating bitter guard or radish over ladyfinger is harmful is fake as per doctors 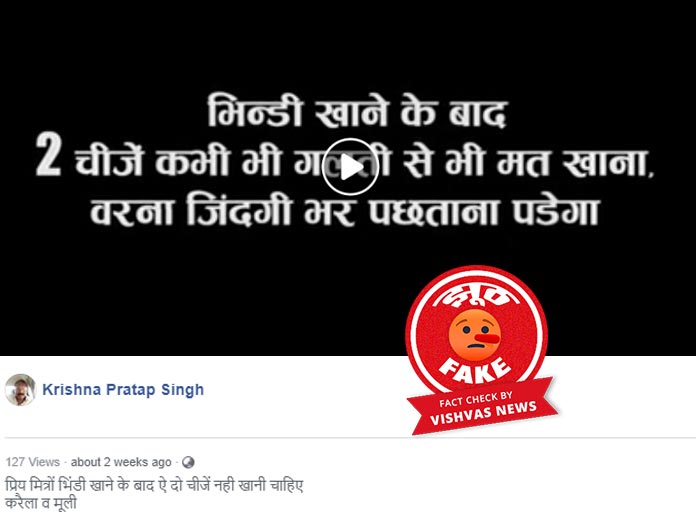 A viral video on social media claims that one should not eat bitter guard after consuming ladyfinger as it will cause poison in the stomach. The video further claims that consuming radish after ladyfinger can cause Leukoderma, a skin disease. Vishvas News investigated by contacting medical practitioners and found that the viral post is fake.

A video circulating across social media and covered by many media outlets claims that one should not eat bitter guard after consuming lady finger as it will cause poison in the stomach. The video further claims that consuming radish after lady finger can cause Leukoderma, a skin disease. You can see the achieved version of the video here.

Vishvas News started its investigation and found that the video is viral across social media and has been covered by various media platforms as well.

Here are some screenshots of posts shared by various users across social media:

We searched online reports on whether the combination of ladyfinger with bitter guard creates poison or a combination of consuming radish over ladyfinger cause skin disease. We did not find any report supporting such claim.

There was no scientific evidence that reported that such combination is harmful.

Instead, there are recipes online that have bitter guard and ladyfinger as ingredients.

We spoke to Dr. Rohit Bhargava, Dermatologist, Max Hospital and he said: “This is a fake news. There is no research that supports that eating bitter guard and radish cause skin disease. Leukoderma is a genetic disorder and we advice patients to consume nutritious and foods rich in anti-oxidants. And do not ask them to stop its consumption.”

Nutritionist Nidhi Sawhney said: This news is fake. I have never witnessed any such case in which eating bitter guard and ladyfinger caused poison.

An Ayurveda doctor, Dr. Vimal N. commented by quoting: There is no scientific evidence which supports that eating bitter guard over ladyfinger can cause poison or eating radish over ladyfinger caused skin disease. This is not mentioned in any traditional text. In fact, mooli is good for most of the toxins.

Dr. (Mrs) Mudasir Rashid Khan who is a dermatologist said: This is a fake news. There is no evidence to support this claim.

The video claiming that eating bitter guard or radish over ladyfinger is harmful is fake as per doctors.