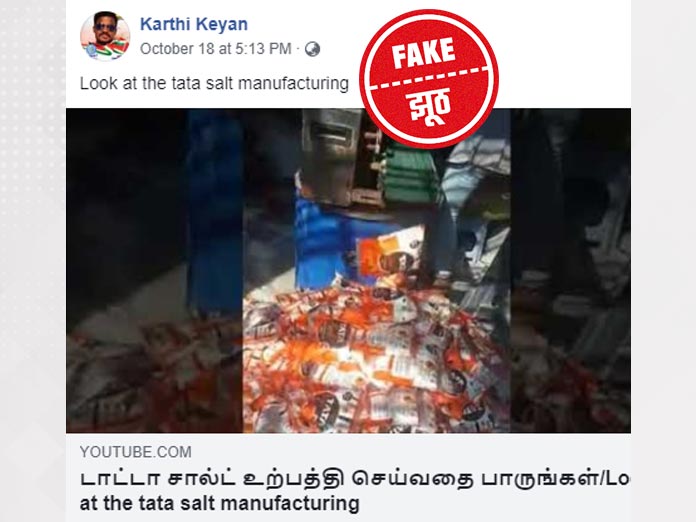 New Delhi (Team Vishvas): A video is going viral on social media in which some people can be seen pouring salt in plastic bags. Tata salt can be seen inscribed on these plastic bags. It is being claimed with the post that this is how Tata salt is manufactured. In our investigation, we found that this claim is false. This is the video of a fake salt manufacturing unit that used to make fake salt in the name of Tata Salt.

To investigate the post, we first put this video on Invid tool and extract its key frames. We then searched these key frames on Google reverse image. In our search, we found a news story on Hindustan Times in which a screenshot of this video was used. The news headline was “Factory packing, selling counterfeit products of top brands busted in Mohali.” According to the news, the incident happened in Dera Bassi area of ​​Mohali, Punjab.

For further confirmation, we spoke to Narpinder Singh, in charge of Dera Bassi police post. He said, “the factory used to make fake goods. We have arrested the factory owner and are investigating from where he used to get the packets that look like the original brands. ”

We then spoke to Tata Chemicals PR, who provided us the official statement of Tata on this metter. The statement read, “The video pertains to a raid conducted by the Tata Salt team along with the Punjab Police against counterfeit salt operations, about two weeks back in Dera Bassi. This is just one of the many operations we have conducted, as part of our on-going fight against counterfeiters. The salt seen in the video is fake branded salt being packed in fake Tata Salt packets. People involved in this incident have been arrested. Tata Salt is produced from natural sea water using the technologically advanced Vacuum Evaporation process. We follow rigorous quality control protocols to ensure that a high-quality product is delivered to consumers, time and time again. This not only includes strict quality checks at the manufacturing location, but also in our distribution system, which includes warehouses.” When asked how the consumers can differentiate between real and fake Tata salt, the spokesperson said “ Real Tata salt completely dissolves in water while the spurious salt does not completely dissolve in the water and leave dirt and impurities behind.” The video of the pure Tata salt test can be seen below.

A post was also found on Tata’s official Facebook page in this matter, in which Tata Chemicals gave information on the matter. The post read, “A video has recently been circulated on social media that shows salt being packed by hand, in fake pouches that resemble Tata Salt pouches. The video pertains to a raid conducted by the Tata Salt team along with the Punjab Police against counterfeit salt operations, just last week in Dera Bassi.. ”

Conclusion: We found in our investigation that this claim is false. This is the video of a fake salt manufacturing unit that used to make fake salt in the name of Tata Salt.