The viral post purporting to be an advert touting ‘soda for babies’ is fake. 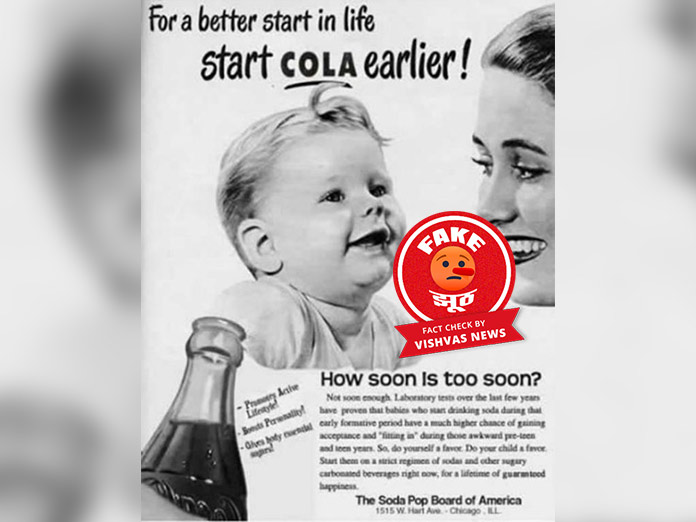 New Delhi (Vishvas News): A post shared on Facebook shows an advertisement attributed to the “Soda Pop Board of America” claiming that the board in the 1950s advocated for children to start drinking cola at an early age. Vishvas News investigated and found that the post being shared is a fake advertisement. As per the search performed by Vishvas News, no credible evidence was found regarding the existence of the “Soda Pop Board of America.”

A post shared on social media purports to show an advert claiming: “For a better start in life, start cola earlier!” The post is attributed to the “Soda Pop Board of America.“

Vishvas News started its investigation by performing multiple keyword searches on Google. We did not find any credible source about the existence of “The Soda Pop Board of America.”

We performed Google reverse image search of the viral photo and landed on a blog post called The City Desk — whose URL is also listed on the poster.

As per the blog, the image shows a “fake ad exhorting parents to give soda to their babies”.

The blog further states the idea for the advertisement came from a post published in 2002 on LiveJournal.

Vishvas News spoke to Marion Nestle, a professor at New York University who wrote a book on the history of soda. She said that the viral post was totally fake. She also mentioned this fake advert in her book. Below is the page and the footnote she shared with us:

Vishvas News also contacted Dr. Sushila Kataria, Senior Director, Internal Medicine, Medanta Hospital, Gurgaon, and enquired regarding the claim in the viral post. She said: “Totally unscientific post. Soda is sugar, leading to obesity, which will snowball into early hypertension and diabetes. In fact due to obesity Children will feel more out of place in society and may even suffer from a lot of low self-esteem. It causes a lot of bloating, and gas and leaves children dehydrated, and uncomfortable.”

Conclusion: The viral post purporting to be an advert touting ‘soda for babies’ is fake.