Fact Check: Viral post claiming Cancer is not disease but fungus is misleading﻿ 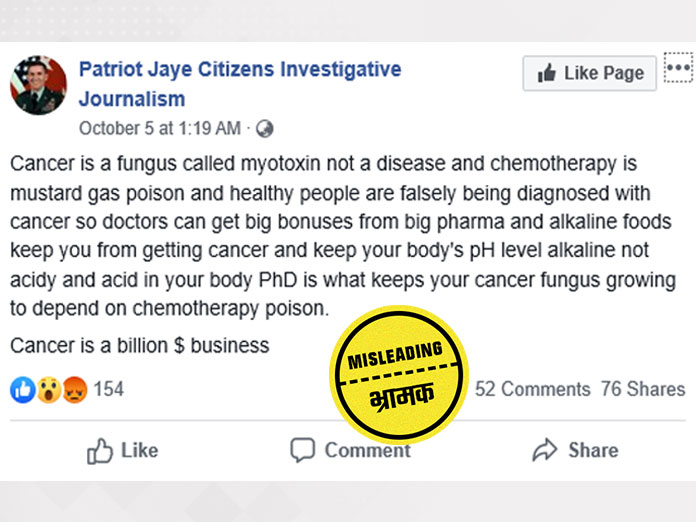 A post is getting viral on social media with cancer-related claims. It claims that cancer is a fungus called myotoxin, not a disease. It further claims that chemotherapy is a mustard gas poison. It also states that alkaline foods keep you from getting cancer and keep your body’s pH level alkaline and acid in your body is what keeps your cancer fungus growing. Vishvas News investigated and found that all the messages in the viral post are misleading.

A post shared on Facebook by a page named Patriot Jaye Citizens Investigative Journalism reads: “Cancer is a fungus called myotoxin not a disease and chemotherapy is mustard gas poison and healthy people are falsely being diagnosed with cancer so doctors can get big bonuses from big pharma and alkaline foods keep you from getting cancer and keep your body’s pH level alkaline not acidy and acid in your body PhD is what keeps your cancer fungus growing to depend on chemotherapy poison.”

Vishvas News started its investigation by breaking down various elements of the viral message.

Claim 1: Cancer is a fungus called myotoxin not a disease

We spoke to Dr. Manish Singhal, who is an Oncologist at Indraprastha Apollo Hospital. He vehemently denies the claim that Cancer is a fungus called mycotoxin. He said: “Cancer patients get fungal infection more frequently as they are low on immunity. Whereas, mycotoxins are toxic compounds that are naturally produced by certain types of moulds (fungi). Cancer and mycotoxins are not related to each other.”

We further searched and found an article on the website of Cancer Research UK. It states that cancer cells are not fungal in nature. Furthermore, plenty of perfectly healthy people can be infected with candida – it’s part of the very normal array of microbes that live in (and on) all of us. Usually our immune system keeps candida in check, but infections can get more serious in people with compromised immune systems.

Commenting on this claim Dr Manish Singhal said: “The first chemo was derived from mustard gas used in world war as part of chemical warfare. Lot has happened in advancement in chemotherapy since then. For example: Paclitaxel used in GI cancer, breast cancer and lung cancer and all female tract cancer is derived from taxusbrevifolia (bark of a tree) but advancements have been made.”

Vishvas News investigated on this and found an article on The Guardian. The article stated that: “Mustard gas was originally used in the first world war, and even though it was subsequently outlawed under the Geneva Convention, over 2,000 nitrogen mustard bombs – 100 tonnes of the poison – were secretly stockpiled on a US ship anchored at Bari, an Italian base.

A chemical warfare expert arrived to confront the aftermath, and the postmortems he ordered showed something startling: people who had succumbed to the poison had very few lymph and bone marrow cells.

Back then, cancer was an enigma. One of the few things known was that cancer cells, like lymph and bone marrow cells, multiply much faster than normal cells. Following the principle that “the dose makes the poison”, scientists wondered if a low dose of nitrogen mustard could be used to treat cancer.And so chemotherapy was born. Like war, it was dangerous and unpredictable, sometimes advancing, often forced to retreat. The first time a patient was treated with cyclophosphamide, the active part of nitrogen mustard, the tumour shrank – something not even thought possible at the time.”

We also found a Wikipedia page on the History of Cancer Chemotherapy which stated:The beginnings of the modern era of cancer chemotherapy can be traced directly to the German introduction of chemical warfare during World War I. Among the chemical agents used, mustard gas was particularly devastating.

Claim: 3: Alkaline foods keep you from getting cancer

Dr. Manish Singhal comments on the claim: “Our natural body pH is alkaline. And body homeostasis keeps pH between 7.35 to 7.45. No matter how much alkaline you may take blood pH won’t change. Any change to alkaline is mostly pathological with implications. Alkaline stuff eaten will reach cancer cells or would be cancer cells (if we talk of prevention) via blood only. But you just can’t change pH by eating alkaline stuff as that’s how body maintains process of homeostasis, that is balance.”

As per an article published in Healthline.com, there currently isn’t any scientific evidence to support the idea that alkaline water can treat or prevent cancer. It’s nearly impossible to grossly alter the pH level of your blood by eating or drinking certain foods or liquids.

Cancer is a fungus called myotoxin not a disease, is a false claim. Another claim says that chemotherapy is mustard gas poison. However, the first chemo was derived from mustard gas used in world war as part of chemical warfare. Lot has happened in advancement in chemotherapy. Alkaline foods keep you from getting cancer is also a misleading claim.