Post claiming every single person who has cancer has a pH that is too acidic is fake. 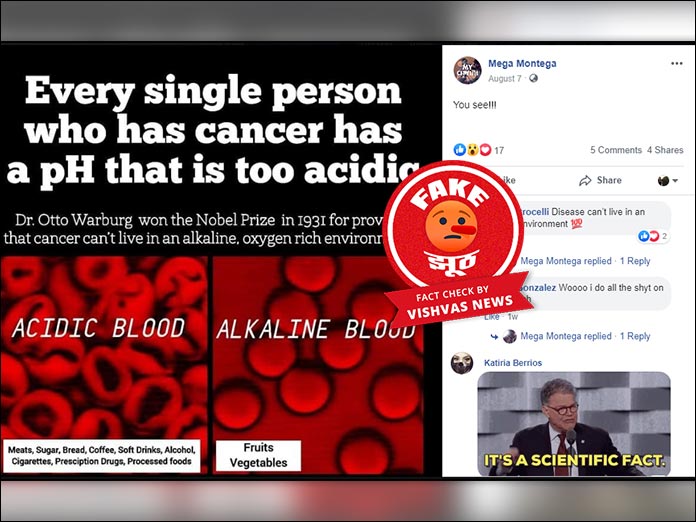 New Delhi (Vishvas News): A post has resurfaced on social media in which it is claimed that every person who has cancer has a pH that is too acidic. When Vishvas News has earlier investigated and found that the viral claim is false. The main source of scientific rationale in the claim comes from the misrepresentation of work performed by Nobel Prize laureate Otto Warburg.

The post shared on Facebook by a user named Mega Montega reads: “Every single person who has cancer has a pH that is too acidic.” The archived version of the complete post can be checked here.

Vishvas News spoke to Dr. Manish Singhal, Oncologist, Indraprastha Apollo Hospital. He said: “Based on logic, the normal human blood pH is slightly alkaline. Ranges between 7.35 to 7.45. Body cannot survive long if it drops below 7. Cancer patient’s pH is in normal range as normal population. Low pH is incompatible with life of neither with cancer cells nor with normal cells can survive in below normal pH for long. An alkaline pH of above the upper limit of normal has its own ill consequences too, such as impairment of mental status or alertness.”

Vishvas team further investigated and found that Dr. Otto Warburg did not win his 1931 Nobel Prize for discoveries relating pH to cancer. According to the Nobel Prize Commission, he won the Nobel Prize in Physiology or Medicine for his discovery of the nature and mode of action of the respiratory enzyme.

We scanned the profile of the user who shared the viral post. We found that the user is based out of New Jersey.

Conclusion: Post claiming every single person who has cancer has a pH that is too acidic is fake.