Fact Check: Cancer has pH that is too acidic is a false claim 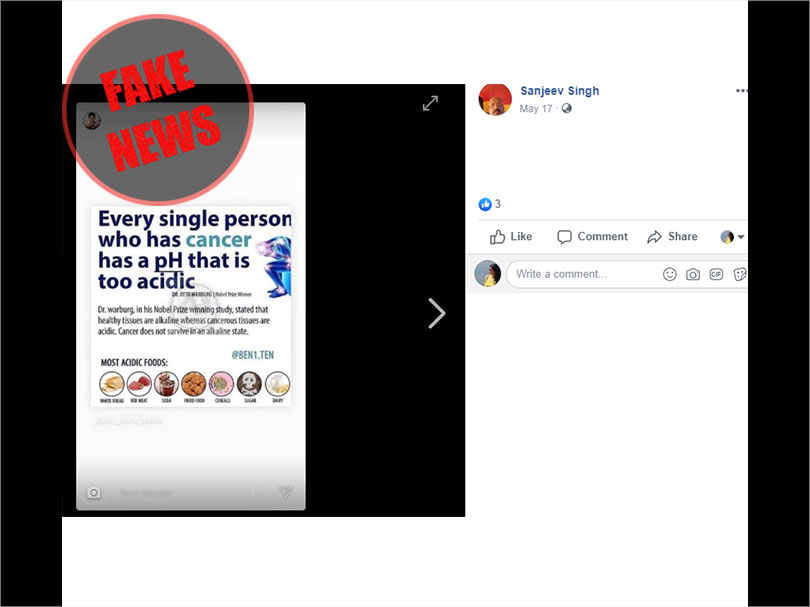 A Facebook post is getting viral in which it is claimed that every single person who has cancer has a pH that is too acidic. The post also claimed that cancer cannot live in an alkaline state. The post has been shared by a Facebook user Sanjeev Singh. This is not the first time the claim is getting viral. It has been posted earlier in 2016 as well.

The main source of scientific rationale in the claim of the Facebook post comes from the misrepresentation of work performed by Nobel Prize laureate Otto Warburg. Vishvas News team investigated the claim and found out that the claim is false.

The Facebook post claims that every single person who has cancer has a pH that is too acidic. It further states that cancer cannot live in an alkaline state. The claim has been attributed to the Nobel Prize laureate Otto Warburg.

We contact Dr Manish Singhal, Oncologist, Indraprastha Apollo Hospital. He quoted: “Based on logic, the normal human blood pH is slightly alkaline. Ranges between 7.35 to 7.45. Body cannot survive long if it drops below 7. Cancer patient’s pH is in normal range as normal population. Low pH is incompatible with life of neither with cancer cells nor with normal cells can survive in below normal pH for long. An alkaline pH of above the upper limit of normal has its own ill consequences too, such as impairment of mental status or alertness.”

Vishvas team further investigated and found that Dr. Otto Warburg did not win his 1931 Nobel Prize for discoveries relating pH to cancer. According to the Nobel Prize Commission, he won the Nobel Prize in Physiology or Medicine for his discovery of the nature and mode of action of the respiratory enzyme for the following work: In our cells nutrients are broken down so that energy is released for the construction of cells. This respiration requires enzymes, substances that facilitate the process without being incorporated in the final products. Otto Warburg studied the respiration of sea urchins and other organisms at an early stage of development. By measuring oxygen consumption in living cells and studying which enzymes reacted, in 1928 he concluded that the respiration enzyme he was looking for was a red ferrous pigment related to the blood pigment, hemoglobin.

In the “Warburg Hypothesis”, which he summarized succinctly in a 1956 paper in Science:

Cancer cells originate from normal body cells in two phases. The first phase is the irreversible injuring of respiration. Just as there are many remote causes of plague — heat, insects, rats — but only one common cause, the plague bacillus, there are a great many remote causes of cancer — tar, rays, arsenic, pressure, urethane—but there is only one common cause into which all other causes of cancer merge, the irreversible injuring of respiration.

The irreversible injuring of respiration is followed, as the second phase of cancer formation, by a long struggle for existence by the injured cells to maintain their structure, in which a part of the cells perish from lack of energy, while another part succeeds in replacing the irretrievably lost respiration energy by fermentation energy. Because of the morphological inferiority of fermentation energy, the highly differentiated body cells are converted by this into undifferentiated cells that grow wildly — the cancer cells.

Warburg compared (in vitro) a tumor’s arteries (which transport glucose and oxygen to a tumor) and its veins (which carry blood that had passed through the tumor):

This process produces lactic acid, and therefore by its nature increases acidity. Both the acidity and the low oxygen would be a symptom, not a cause.

We noticed a logo @BEN1.TEN on the Facebook photo. We searched the social media page of the same logo but found that the page has been removed.

We further investigated by checking the profile of the person using StalkScan and found various misleading posts shared by the user earlier as well.