Post Claiming COVID-19 Testing Patent Was Submitted In 2015 is fake and has resurfaced on social media. 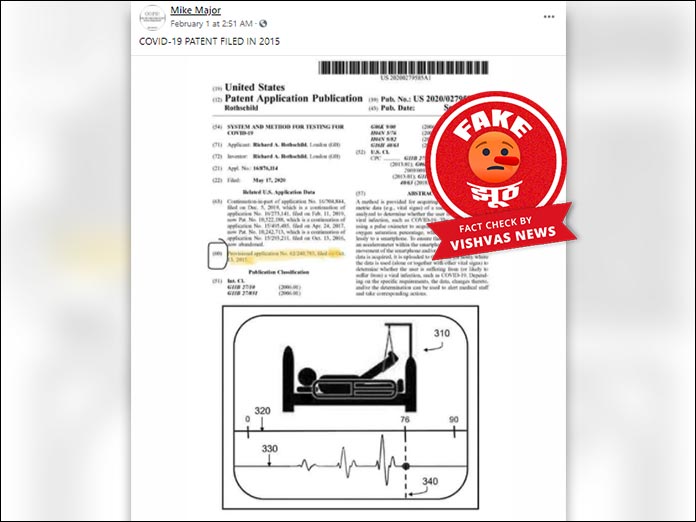 New Delhi (Vishvas News): A post showing a screenshot of a patent application has resurfaced on social media. The caption alongside the photo claims that the COVID-19 patent has been filed in 2015. Vishvas News has earlier investigated the post and found it the claim to be fake. The fact is that the featured image is the screenshot of the child application that was filed in the year 2020 following the submission of the parent patent application in 2015 that was not related to COVID-19.

A Facebook user named Mike Major shows a screenshot of a patent application. The caption alongside the post reads: COVID-19 PATENT FILED IN 2015.

As per the screenshot, the application has been filed on May 17, 2020. Also, the highlighted portion states that a “provisional application” was filed on October 13, 2015.

The complete fact check can be checked here.

The filing is a continuation of an existing application. The Rothschild’s patent was initially filed in the year 2015 for a method of “acquiring and transmitting biometric data.”

The post has resurfaced on social media and is shared by the Facebook user Mike Major. When we scanned the profile of the user we found that the user has shared fake posts in the past as well.

Conclusion: Post Claiming COVID-19 Testing Patent Was Submitted In 2015 is fake and has resurfaced on social media.