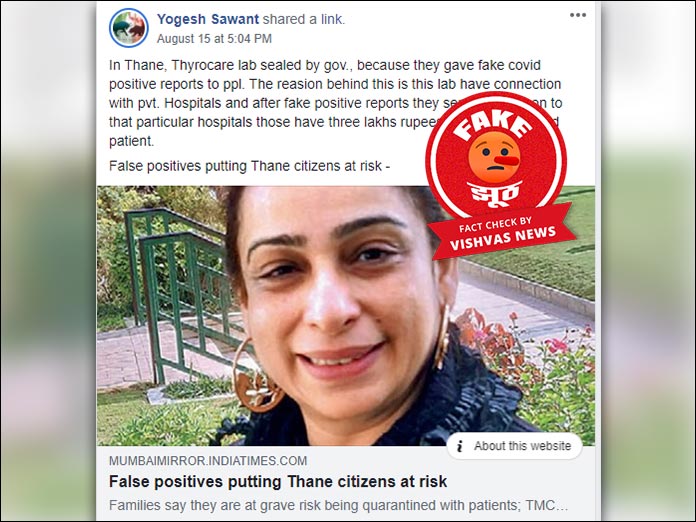 New Delhi (Vishvas News): A post has resurfaced on social media in which it has been claimed that Thyrocare lab has been sealed in Thane by the government for diagnosing fake COVID positive reports to people. When Vishvas News had earlier investigated we found that though Thane Municipal Corporation has asked Thyrocare to halt COVID-19 testing in Thane, the post claiming that Thyrocare labs in Thane have been sealed is fake news.

A post shared on Facebook by a user named Yogesh Sawant reads: “In Thane, Thyrocare lab sealed by gov., because they gave fake COVID positive reports to ppl. The reasion behind this is this lab have connection with pvt. Hospitals and after fake positive reports they send that person to that particular hospitals those have three lakhs rupees package for Covid patient. False positives putting Thane citizens at risk.” The archived version of the post can be checked here.

However, in none of these reports, it was claimed that Thyrocare labs were sealed by the government. According to the report, the Thane Municipal Corporation has asked Thyrocare labs to stop testing coronavirus swab samples of suspect patients after the civic body allegedly found irregularities in the test results from the private lab.

The complete fact-checked report can be read here.

Mumbai Mirror and Thyrocare had also tweeted about this fake news.

The post is shared on Facebook by a user named Yogesh Sawant. When we scanned the profile of the user we found that the user has 392 followers.

Vishvas News investigated and found that this lab in Thane is not sealed as claimed in the viral post. TMC has not sealed the lab. However, they have issued the notice seeking clarification on the irregularities in the reports. This post had circulated earlier as well and has been fact-checked by Vishvas News in June 2020.